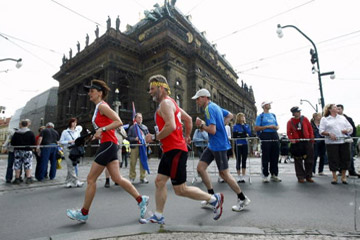 Runners amble by the historical center of Prague, Czech Republic, during the Prague International Marathon in May 2010.
Vit Simanek/isifa/Getty Images

2010 marks the 2,500th anniversary of the marathon. In 490 BC, undermanned Greek forces defeated the Persians, arguably the world's greatest army. According to legend, an Athenian named Pheidippides ran the 40 kilometers (24.85 miles) from the Greek city of Marathon to Athens to announce the unlikely victory, after which he immediately collapsed and died [source: AIMS]. Pheidippides' epic run was repeated at the first modern Olympic Games in Athens in 1896, where a Greek runner rightfully took the gold.

Two-and-a-half millennia after the first unofficial marathon, long-distance running has never been more popular. In 2009, the New York Marathon -- now measuring the standard 42.195 kilometers, or 26.2 miles -- opened slots to more than 43,000 participants. The 2010 London Marathon received 120,000 applications in three days for only 35,000 spots in the race [source: Gibson]. Incredibly, hardly any of the intrepid racers collapsed and died.

The Association of International Marathons and Distance Races (AIMS) is an organization of over 300 member races in 90 countries dedicated to promoting long-distance running worldwide. Through its Web site, its quarterly magazine Distance Running and its many promotional efforts, AIMS endorses and advertises marathons, half-marathons, 5Ks, 10Ks and "fun runs" around the world to serve both local and traveling "destination" runners.

According to a nonscientific survey of running magazines and Web sites, destination running is a hot hobby among the marathon set, which is increasingly educated, wealthy and female. Back in 1980, only 10 percent of U.S. marathoners were women. By 2009, that number had risen to 41 percent [source: Running USA]. Nearly half of U.S. marathoners of both sexes are also over the age of 40. These runners see destination races as the ideal training motivator and a perfect excuse for a family vacation to scenic and often exotic locales [source: Bakoulis]. Who wouldn't be lured by a June "Santa Claus" marathon in Finland where participants cross the Arctic Circle under a midnight sun?

In a world that spends more than $5 billion annually on running shoes, AIMS standardizes, certifies and promotes competitive road races around the globe. Keep reading to learn more about the mission of AIMS and how to become a member.

Back in 1982, international race organizers founded AIMS to share information, innovative ideas and tips for best practices. A few years later, members drafted the official "Articles of Association," which states the goal of AIMS. The group wants to:

The group has grown from 28 members in 1982 to include more than 300 certified races in 90 countries. As mentioned in its mission statement, AIMS works closely with the International Association of Athletic Federations (IAAF), the world governing body for track and field events. Together, both organizations publish and help enforce racing standards like course measurements and timekeeping methods to ensure that a world record is really a world record and that runners of all skill levels have the best possible racing experience.

AIMS also publishes an event manual, which is a detailed guide for starting your own road race, everything from initial considerations ("competitive race or fun run?") to course design ("single or multiple lap?") to accurate timing systems. Before AIMS can certify a race, an AIMS official must measure the course. This is easier said than done, since AIMS measurers are a rare breed (in all of Great Britain, for example, there are only 12). Official measurements are critical for awarding world records and equally important for clocking personal best times.

To encourage open communication and cross-promotion among members, AIMS holds a biannual World Congress in different international capitals. In addition, AIMS recognizes an athlete of the year and awards the world's fastest times in different long-distance events. The organization also helped install the AIMS Marathon Museum of Running at the Berlin Sports Museum in 1994, which is now permanently housed at the Berlin Olympic Park.

Keep reading to find out how to become a member of AIMS and learn about some of the benefits it brings to race organizers.

AIMS is an association of international running races, not individual runners; the race itself is considered the "member." Organizers of marathons or long-distance races can apply to become either a full member or an associate member. Associate membership is reserved for races that have been run for two years or less; AIMS awards full membership to more established competitions.

As mentioned earlier, all AIMS member races must first be measured by a certified course measurer. The race organizers are expected to cover the costs of the measurement process as well. If multiple races are run on the same day (for example, a marathon, half-marathon and 5K fun run), then all races must be measured and certified individually. A certified measurement is good for five years, as long as the course isn't modified in the interim.

The chief benefit of AIMS membership is international race promotion. All AIMS member races are listed in the race directory and race calendar on the group's Web site. The directory is organized by country and includes links to race Web sites, organizer names and contact information. The calendar is continuously updated to promote upcoming races around the world. Full members may recieve a free quarter-page advertisement in Distance Running magazine, published quarterly by AIMS with a circulation of 400,000.

As a condition for membership, AIMS race organizers must set up a booth at the race exclusively for AIMS officials. Usually, this booth is used to distribute free copies of Distance Running and to advertise upcoming races in the region or around the globe. Interestingly, some of the world's largest marathons -- including the New York and London marathons -- aren't AIMS members, presumably because they don't need the extra promotion.

For more information about athletic organizations around the world, run over to the links on the next page.

In 2009, the following races had the highest number of finishers: