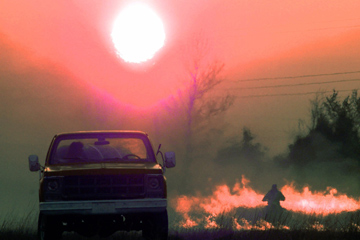 AP Photo/Orlin Wagner
A ranch worker burns old grass on the Adkins Ranch in Morris County, Kan. The fresh growth improves the quality of the pasture.

"As ranchers, we've always been half-mechanics," Probert said. But today, when ranchers open up the hoods of their trucks, "we don't know what we're looking at anymore." He added that in terms of powerplants and payloads, the selection of trucks is better than it's ever been. So while those working on a ranch may not be able to fix their own trucks, the trucks need repair work less often.

That's no accident. Manufacturers like Ford work to identify the engine stresses caused by living on a ranch, then make sure the truck can stand up to every one of those hardships. It's called "torture testing," and it could be fun if you like seeing how much you can put your truck through.

One of the tests Ford uses is a series of bumps about half the height of an average curb. The truck drives over bunch of them in a row to simulate a particularly awful washboard road. "It shakes the devil out of the truck," Ufford said. They also simulate life on a ranch by driving through a sand wash to overtax the drivetrain and check the engine for overheating. In addition, they test the truck in shallow water to make sure it doesn't kill the engine or suck up water and affect the electronics.

Without an engine, a ranch truck is useless. And since ranchers depend on trucks to get the daily work done, the engine alone -- without chassis or driver -- gets mounted on a dynomometer and run for hundreds of hours at full load. This automates the process of running the engine while speeding up, slowing down, hauling feed, animals or equipment, all without stopping.

After the tests in the lab, the trucks are ready to go out for some real-world testing to make sure they're ready for ranch life. The trucks drive up steep hills with heavy trailers, through deep mud bogs and over plenty of challenging terrain. To put a truck's engine cooling system to the test, a trailer is hitched up in 110-degree Fahrenheit (43.3-degree Celsius) desert heat -- at the bottom of a steep hill. Ford tests the opposite extreme at a special facility in Canada, where engineers do drivability and cold-start tests at 20 degrees below zero (-28.9 degrees Celsius). After all, living on a ranch sometimes means a truck will face both extremes in one year. These trucks are also tested for carrying loads with high centers of gravity, like bales of hay piled high or even in-bed campers.

There are several aspects of ranching that can stress a truck's engine; the testing has to be as harsh as -- or even harsher than -- the conditions it may face every day, all year long, on a working ranch.

For more information about ranch trucks, ranch life and other related topics, follow the links on the next page.