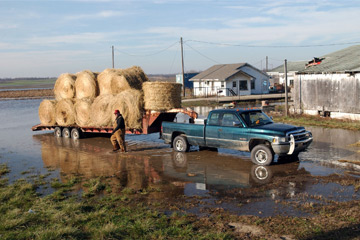 AP Photo/ Daniel R. Patmore
Brian Wesner walks around his truck and load of hay parked in high floodwaters. Wesner had the hay stored in the buildings for his 200-plus head of cattle.
See more pictures of trucks.

Most of us rely on our cars to get us to work or school every day -- a commute that can be long or short, smooth or stop-and-go. But when you're living on a ranch, the truck you rely on doesn't just get you to work; there are times when it has to do the work once you get there, too. Ranch life, similar to farm life or heavy-duty construction work, is much harder on a truck than merely sitting in traffic on your daily commute.

Dan Probert is the Executive Director of Country Natural Beef in Oregon, a group of ranches that range from 300 acres to one million acres, and every size in-between. "Where we have issues," Probert said, "is that we're not on pavement very much."

Working on a ranch often requires taking two-track dirt roads to remote areas of the land. That means the trucks need enough ground clearance to keep grass, dirt and rocks out of the engine and undercarriage, plus they need to be sealed up tightly enough to keep dirt and dust out of the electrical systems, including the power windows and locks.

But ranch life puts the most stress on a truck's engine. It needs to have enough torque to pull a trailer full of cattle or a bed full of hay from a dead stop, and enough horsepower to get that load up to speed. It also needs to be built solid and bolted-up tight so it doesn't shake apart on rutted, washboard roads.

Keep reading to find out what kinds of stresses a ranch truck engine typically faces and how one manufacturer "torture tests" its trucks.