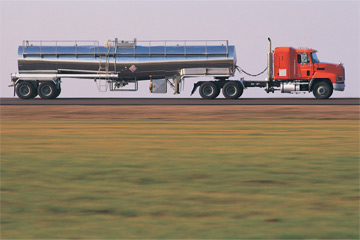 Trucks Image Gallery Tanker trucks are increasingly headed for ranches and farms, as these operations depend on more and more oil to keep them running. See more pictures of trucks.
Stewart Charles Cohen/Getty Images

Horses, cowboy hats, cattle and dust: These are the things that likely come to mind when you think of ranches. As strange as it may sound, you might want to add "oil" to that list. Ranchers and farmers depend heavily on different oil products, including machine oil, heating oil and motor oil, often keeping oil storage tanks on their property. In fact, 8 percent of U.S. farms and ranches keep enough oil on hand to be regulated under the U.S. Environmental Protection Agency's (EPA) Spill Prevention, Control and Countermeasure plan [source: EPA]. Add in ranchers' need for gasoline and diesel fuel, and you can understand why oil and fuel tanker trucks are a common sight out on the range.

Like everyone else, ranchers and farmers are very sensitive to the price of oil, but because they use so much, rising oil prices can quickly eat into their profits. Just ask the Madsen family, which farms around 10,000 acres (4,047 hectares) in South Dakota. In the process, the Madsens may go through up to 2,000 gallons (7,571 liters) of fuel a day, costing them more than $100,000 over the course of a year [source: Miller]. Families like the Madsens purchase fuel in bulk, not only to save money but also for convenience. Because tank trucks typically carry between 5,000 and 9,000 gallons (18,927 and 34,069 liters) of fuel, a farm like the Madsens' would require fuel deliveries every few days.

Of course, not all tanker trucks are welcome on ranches and farms. That's because ranches and farmland often sit on massive oil reserves, and oil companies' tanker trucks are constantly collecting oil from their network of wells. Since many ranchers don't own mineral rights to their land, they don't see a penny of the oil money. Those ranchers aren't pleased to hear the rumble of such trucks as they make their way around the ranch.

In addition, as oil prices rise, reserves that were once considered too expensive to tap are suddenly bustling with activity, and so are the ranches and farms under which they sit. Take, for instance, the oil reserve known as the Bakken, which is located on the border of North Dakota and Montana. The number of oil wells in North Dakota nearly quadrupled over the course of 2008 as oil companies ramped up drilling operations in the area. In addition, the state expects to have 12,000 oil workers by 2010, meaning tanker trucks will be an increasingly common sight for area farmers and ranchers [source: Davey].

But are these trucks really anything more than a nuisance? Read on to find out.

Oil Tanker Trucks' Effects on Ranch Roads and the Environment

As oil drilling becomes more common on ranches and farmland across the United States and Canada, the impact of that drilling on local roads, rivers and land is making many people furious. Ranchers in South Dakota, for instance, are protesting the 313-mile (504-kilometer) Keystone Pipeline, which would carry oil from Alberta, Canada, down to the gulf coast of Texas. The ranchers say that oil company trucks are running roughshod over their land, trespassing and posing environmental threats to their ranches. They have some cause to be worried; residents near Parachute, Colo., claim oil companies have carelessly left open waste pits along their roads and rivers, the result of a 1.2 million-gallon (4.5 million-liter) drilling mud spill that occurred in early 2008 [source: Lofholm].

Other ranchers contend that oil tanker trucks bring weeds in on their trucks, a clear violation, for example, of a Montana law that requires oil companies to protect ranch land when performing drilling operations [source: Schmidt]. Weeds aren't the only problem associated with oil tanker trucks. Ranchers have also worried about the clouds of dust that tanker trucks kick up as they drive down country roads, saying that the dust is causing "cattle pneumonia" among their livestock or mechanical problems with their equipment.

Tanker trucks also tremendously strain area roads that were built to handle much lighter traffic. Repair crews from Dunn County, North Dakota, for example, have watched road repair expenses skyrocket as oil company traffic has increased. Even school buses are taking a hit, spending more time in the shop after hitting potholes and driving over bumpy, uneven roads. The county's repair crews simply can't keep up, as limited budgets and man-power curtail their efforts. In some cases, the crews have even placed warning flags along roads that have become dangerous from wear.

Oil companies say they are willing to work with ranchers to resolve some of the issues ranchers have with their operations, spending money to reseed land damaged by drilling rigs and offering a small percentage of royalties to ranchers who don't own their land's mineral rights.

Keep reading for links to more articles on ranch life.

For decades, Tweeti Blancett had no problem with the drilling operations near her and her husband's New Mexico ranch. That was before the energy companies failed to reseed her land and allowed salt water to leak into the ground (or so Blancett says; the oil companies insist they've done nothing wrong). Not one to take things lying down, Blancett formed an unlikely partnership between local ranchers and environmental groups to push for greater oversight for energy companies. She has taken her fight all the way to Washington, D.C., where she's testified before Congress to oppose expanded public drilling rights for oil companies.