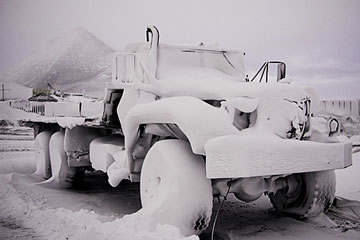 Weather poses an array of issues for cars and driving.
Photo courtesy of the United States Antarctic Program

For many truck owners, an automobile isn't just a way to get from point A to point B. It's a way to make a living -- or at least one component of it. For these drivers, extreme weather can have especially far-reaching consequences.

Weather poses an array of issues for cars and driving. Most of them are obvious, like a torrential downpour limiting visibility, or an icy hill creating traction problems for a truck hauling cargo. But it's not "just" about wheels slipping on an icy road. Weather reaches all the way under the hood. In fact, NASCAR teams (it doesn't get much more serious than NASCAR when it comes to "under the hood") test and tune their cars in different climates in order to avoid any weather-related surprises on race day [source: Union-Tribune]. There's even a way to mechanically supply air at a certain temperature, pressure and humidity directly to the engine's air intake so NASCAR mechanics can see exactly how the car is going to respond under particular atmospheric conditions.

That's for racing. Trucks don't typically need to go from zero to 60 miles per hour in three seconds. But it's the same general idea. Weather affects performance. With trucks, and any type of automobile, for that matter, under-the-hood climate effects tend to come down to two main issues: start-up and overall power.

In this article, we'll find out how extreme climates affect the way cars and trucks operate. We'll look specifically at battery and engine performance in very hot and very cold weather conditions, and we'll check out what drivers can do to prepare their vehicles for extreme temperatures. No one wants to be stranded in the middle of nowhere when it's 10 below (-10 degrees F or -23 degrees C).

Likewise when it's 110 degrees F (43 degrees C): Most people associate cold weather with battery problems, but extreme heat is actually even more damaging to a truck's power source. 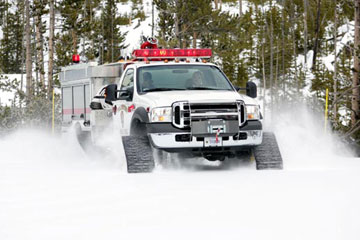 Weather poses an array of issues for cars and driving. SSLA

The battery is involved in the engine, of course, and we've already discussed one big weather issue affecting both components: very viscous engine oil. The thicker the oil, the more energy it takes for the engine parts to move in the crankcase. In this way, the engine can lose some of its power output in extremely cold weather.

The bigger engine problems, though, occur in extremely hot climates. First, there's the problem of overheating. An overly hot engine isn't as efficient as a cool one, and stop-and-go driving on a hot day can lead to 200-degree F (93-degree C) engine temperatures. This affects power output.

In 200-degree heat, water in the engine compartment is turning into vapor, which can sometimes block the flow of gas through fuel lines. This further affects power output.

And on a hot day, air is less dense (the colder the air, the more densely packed the air molecules). With fewer molecules in any given amount of air, there's less oxygen available to ignite fuel -- further affecting power output.

This last issue is also a problem on particularly humid days, because water vapor is taking up some of the space that would otherwise belong to oxygen. So a very hot, very humid climate is about as rough as it gets for a hardworking truck engine.

To try to avoid engine failure in extreme climates, you can:

With a little knowledge and forethought, truck owners can reduce the chances of getting stranded at the worst possible time.

For more information on extreme climates and automobiles, look over the links on the next page.