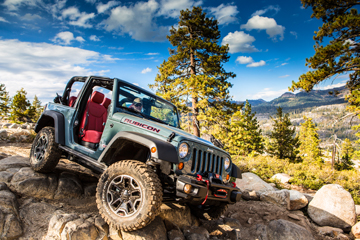 Off-roading fanatics -- you know, those grease-covered and dusty guys with the modified Jeeps that can crawl over rocks or vintage Land Rovers that look like they just crossed the Sahara Desert -- well, they love to talk about torque. "In off-roading circles, torque is something people tend to savor," said Andy Lilienthal of Warn Industries. (Don't know Warn? Those are the guys who make the winches that pull off-roaders out of trouble.) But why is torque so sought-after?

When you're really off-road -- not just in the parking lot of the campground, but way out there in the boonies -- you're trying to go carefully, not fast, Lilienthal noted. There are logs, boulders, verticals, sand, mud, and who knows what all to contend with out there, and you're not going to simply mash the gas to get over or through any of it. Nor is AAA going to trundle a tow truck out to the middle of nowhere to save you when you spin your wheels into the ground. Torque is the force that's output by a device on an object, according to Lilienthal. It's part of the equation that gets you to horsepower, but torque is instantaneous. "The greater the initial low-end torque, the quicker you can go over an obstacle," he said. He's seen a diesel engine with so much torque ("a ridiculous amount," to use his scientific phrasing) that the driver didn't even have to touch the throttle. The vehicle could drive over a boulder at idle.

The kind of low-end torque the rock-crawlers love sacrifices speed for control. It doesn't require high revolutions per minute from the engine to reach maximum torque, and it doesn't require as much throttle to move forward when the torque comes on so quickly. But since these torque-y engines are usually coupled with low-range transfer cases and higher gear ratios for better control of the vehicle in dodgy driving situations, your top speed is going to plummet. Leave the turbos to the track stars; you've got an old logging road to conquer.

Author's Note: Why is torque important in off-roading?

I didn't just call Andy Lilienthal because he works at Warn Industries. I really called him because of the Teal Terror. That's the name of his Suzuki Sidekick, the one that he takes far, far off the beaten path on weekends. The one with a winch that pulled a stuck Jeep from peril. The one that, when it reaches peak torque way up at 5,300 rpm, "sounds like it's about to spin out of the engine bay," according to Lilienthal. The one with all of 95 horsepower. And, of course, the one that's that particular shade of late-'90s teal, hence its name. Laugh all you want at the Teal Terror, but I've seen pictures that prove it's capable of doing just about anything except being taking completely seriously.