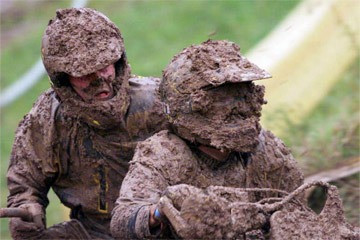 If you’re brave enough, you could always go mudding on a bike. Just prepare to get really, really dirty.
Michael Kienzler/Bongarts/Getty Images

Have you ever seen a big muddy pit and wanted to drive through it, spinning your tires and making the mud sling everywhere? Do you embrace your car being caked in layer upon layer of dirt? Then you might be into mudding.

Mudding, also known as mud bogging, mud slinging or mud racing, is a type of off-roading that centers on getting dirty. In its simplest form, mudding just means driving through its slimy, grimy namesake.

Mudding is tricky for the simple fact that you don't always know what's hidden under the mud -- rocks, tree trunks, anything you can imagine. There are also many types of mud, from thin and soupy to thick and slimy. In fact, driving in two different kinds of mud can be as different as driving on sand and ice. Each type of gunk presents its own challenges and requires variations in your driving technique.

This brand of off-roading hinges on maintaining and controlling your speed: You want to drive fast enough so that you'll make it through without stopping or sinking, but slowly enough so that you can manage any hidden obstacles beneath the mud. And if you do come to a stop, getting moving again in mud is difficult because it is hard to gain traction on such a slippery surface. If you're not careful, you might wind up spinning your tires and digging yourself deeper into the muck.

The key to mudding is maintaining a steady speed the whole way through. How fast you drive when mudding really depends upon the type of mud you're in and your vehicle. The important thing is to assess the terrain and make a safe judgment about your speed.

While you can go mudding with just about any tires, specially designed mud terrain tires are the best. Mud terrain tires have extra large lugs, or the part of the tire treads that sticks out, with wider and deeper spaces in between them. This arrangement keeps mud from getting stuck in between the lugs, allowing you to maintain traction.

Mud isn't the only type of ground that you can sink into; sand can get you stuck as well. Read on to find out the basics of scaling sand dunes with your off-road vehicle.

The Cardinal Rule of Off-Roading

By nature, the possibility of getting stuck while off-roading looms large. No matter how prepared you are or how many times you've driven through an area, the unexpected can always happen. This brings us to the cardinal rule of off-roading: Never go alone. You never know when you'll need someone to tow your vehicle out of the mud.