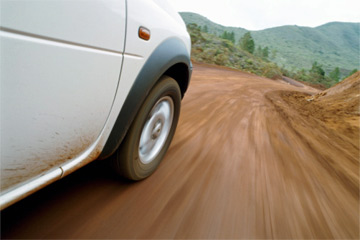 Off-road suspensions must perform well on the trail and the highway.
Sami Sarkis/Getty Images

Vehicle suspension has three main jobs: smooth out bumps, keep tires touching the road and control vehicle stability. You can read more about the basics in How Car Suspensions Work, but let's do a quick review. The spring absorbs the energy of forces acting on your wheels. The two most common types of springs are coil springs and leaf springs. Both types absorb energy well, but require shock absorbers to decrease or dampen their vibration after hitting a bump.

The front suspensions of off-road vehicles tend to be even more complicated for two reasons: The wheels are usually bigger, and the terrain offers nastier bumps. The front suspension systems of four-wheel-drive vehicles and SUVs most often feature a solid axle with leaf springs. Such a suspension is called a dependent system because the wheels are connected laterally so that they move together as a unit. Leaf springs attach to the frame of the vehicle and then, via U-bolts, to the axle housing. A sway bar mounted to each side of the axle controls body roll.

Other 4x4/SUV front suspensions include the following:

On the rear of most 4x4 vehicles, you'll almost always find a solid axle with leaf or coil springs. Off-road drivers often mount shock absorbers on opposing sides of the axle -- one in front and one behind the axle -- to reduce axle tramp, a rapid up-and-down motion of the rear axle caused by sudden acceleration.