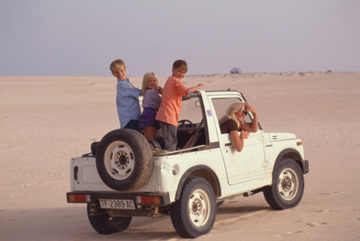 All-terrain vehicles (ATV) are compact, powerful and rugged machines that can handle a variety of jobs. You'll find them doing hard work on a farm or ranch, providing hours of enjoyment on riding trails or even tearing up motocross tracks in professional racing series. They vary in size and power, from models suitable for younger riders to powerful ATVs with 800 or more cc (cubic centimeters) of engine displacement.

Almost all ATVs are intended for use on non-paved terrain: dirt trails, snowy and gravelly roads, open fields or muddy paths. So technically, they aren't meant for "all" kinds of terrain. In fact, their high centers of gravity and knobby rubber tires actually make them quite unsafe to drive on paved surfaces. For this reason, many manufacturers now refer to their ATVs as "off-road" vehicles, even though there's no real distinction between a so-called off-road ATV and most other ATVs. There are also vehicles known as UTVs (utility terrain vehicles), which are larger and slower than ATVs, have large cargo areas and two side-by-side seats. These are meant mainly for work rather than racing or riding for fun.

Right now, however, we're going to look at ATVs from top to bottom to learn how they work.

The wheel hubs of ATVs measure between 8 to 12 inches (20 to 30 centimeters) in diameter, and 5 to 8 inches (13 to 20 centimeters) wide. They mount to the axles with four bolts. Most wheels are made of aluminum, but you can buy steel ones as well. You can find wheels in a variety of colors, from chrome to flat black or anodized to resist corrosion, to brighter colors like yellow or blue.

The stock tires that come with most ATVs are "all-purpose" tires. They're designed for optimum performance across a range of conditions, but not for specific tasks. If you're upgrading your ATV tires, you need to think about what they'll be used for. If you plan to do a lot of trail riding in difficult terrain with lots of loose soil or mud, you'll want an aggressive tread with large lugs, bars or paddles to dig into the dirt. These tires also work well in snow.

However, if you want to use your ATV primarily as a workhorse, aggressive treads will tear up your lawn and will be unstable on flat terrain. For these purposes, you want a more shallow tread that spreads out the weight of the ATV and doesn't sink or dig in to your lawn. Finally, although aggressive treads work well in snow, if you plan to do a lot of work in snowy and icy conditions, you should consider special soft compound tires designed for maximum winter traction. Some ATV tires even have steel studs, and many owners wrap chains around the tires for traction on ice.

Next, we'll study the engines that give ATVs their power. 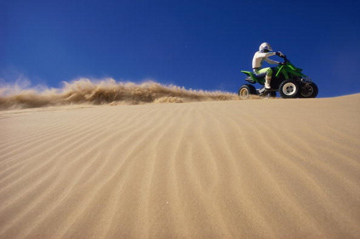 Today's ATVs can be quite powerful, but the rider has to be able to handle that power.
Mike Powell/Getty Images

The earliest ATVs were fairly primitive; they used two-stroke engines and didn't offer much in the way of convenience or comfort. They didn't offer much in terms of performance, either: The very first ATV, produced by Honda in 1970, had a mere seven horsepower. The popularity of ATVs grew immensely in the 1980s and performance improved over time [source: Casper]. Today's ATVs can have more than 50 horsepower, and racing ATVs have even more than that.

In many modern ATVs, the engine is linked to a continuously variable automatic transmission (CVT). This means that the rider doesn't have to worry about shifting gears and the vehicle will automatically choose the best gear ratio for the speed, grade and amount of effort required (pulling a trailer full of logs up a hill is a lot different from a high-speed run down the straightaway at your local motocross track). If an ATV doesn't have a CVT (meaning it has a standard gearbox), there may be a foot-pedal shifter or a shifter on the handle bars.

In addition to two and four-stroke varieties, ATV engines come with either one or two cylinders, and with displacements typically measuring between 100 and 800 cc. It's important to note that safely riding an ATV requires a certain amount of body weight and physical strength, so the ATV's size and power should be matched to the rider. Disaster can strike, for example, when a young rider uses an overpowered or overly large ATV -- he or she simply can't control it.

In the next section, we'll cover ATV batteries.

While the engine supplies the horsepower that propels an ATV, most of the accessories that you might want to use with an ATV run off the battery. Whether you're using the headlights, a winch or some other kind of attachment, you need a battery that can supply the necessary power. The battery also powers the electric starter, so you need it just to get going.

ATVs use lead acid batteries; you can use the conventional (the kind you have to top off with distilled water) or AGM (absorbed glass mat) varieties. AGM batteries generally cost more, but provide more power and require less maintenance. ATV batteries are designed to be good at providing a brief shot of power, such as when the ATV starts or when using the winch for a few minutes. Long-term use, like leaving the headlights on without the engine running, can drain the battery.

The battery is usually charged by the ATV's charging system. Whenever the engine is running, the battery is being charged -- as long as you're not doing something that drains the battery faster than it can be charged. It's important to make sure the battery is charged up before you shut the ATV down and put it away. Without a full charge, sulfates can build up inside the battery and reduce its efficiency.

ATV batteries can also be charged by an external charger. It's recommended that you use a charger designed for "powersport" batteries. There are crucial differences between ATV batteries and automotive batteries, so using a car battery charger isn't the best choice.

Up next: ATVs that run on battery power alone. 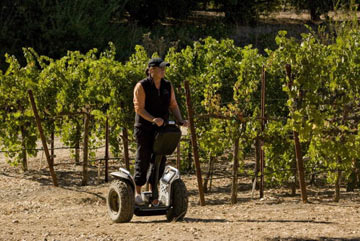 A few innovative companies have begun to offer electric ATVs. Although there have been electric ATVs on the market for years, they are mainly "low-performance" vehicles intended for children or for very simple tasks. The new breed of electric ATV aims to be as powerful as a fully sized gasoline-powered ATV. Instead of a gasoline engine, electric ATVs use electric motors powered by lithium ion batteries charged by plugging the ATV into an outlet.

What are the advantages of electric ATVs over gas-powered models?

While electric ATVs haven't achieved mainstream popularity yet, their market could grow in the coming years. In fact, even the Mythbusters' Jamie Hyneman is involved in electric ATVs -- he played a role in the development of the Model One electric ATV prototype produced by Barefoot Motors.

Read on to the next section to learn all about ATV shocks.

When they're taking on off-road terrain, ATVs tackle a lot of bumps, ruts, slopes and obstacles. If you're racing your ATV or hitting the trails aggressively, you might even catch air. A solid suspension is crucial to absorbing that kind of punishment, and shocks and springs do the heavy lifting.

ATVs shocks use a reservoir filled with oil to resist compression of the suspension. The spring, which usually coils over the shock, also resists compression and pushes the suspension back to its original position. There are two important variations among ATV shocks: how adjustable they are and where the oil reservoir is located.

If the oil reservoir is inside the shock itself (known as a monotube design) the oil is prone to heating due to the friction of the shock's travel. This heating makes the oil foam and can seriously reduce the effectiveness of the shock. The stock shocks on most ATVs are of this type.

Adjustability is important not just for high-performance ATV racing, but for comfort. There are three main adjustments that can be made to ATV shocks: compression, preload and rebound. All ATV shocks let you adjust preload (how compressed the springs and shocks are without hitting any bumps), but only high-end shocks allow compression and rebound adjustments.

Take a look at all the attachments and accessories you can use with an ATV in the next section. 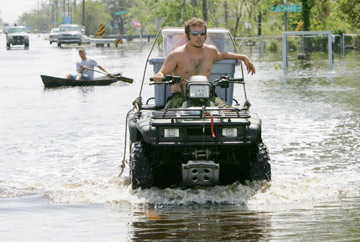 An ATV is perfectly useful for getting from place to place or having a fun time on the trails, but to get some serious work done, you'll need some attachments.

There are lawn-mowing attachments that go either ahead of or behind the ATV. Some models have their own motors to power the blades. Trail-behind mower attachments sometimes use an offset tongue so the mower actually runs beside the ATV. This lets the ATV drive on the grass that's already been mowed instead of plowing through the tall weeds.

A winch is a crucial ATV accessory. It will let you drag heavy logs off the trail, and it'll pull the ATV itself through deep mud.

An ATV can double as a miniature snow plow with a plow attachment. The plows attach to an ATV's winch, which allows the plow to be raised and lowered. If you're dealing with a lot of snow, you can get a snow blower attachment. Like mower attachments, these accessories have their own motors. To dodge all that flying snow (or any that might be falling), you can get a soft-top "cab" that encloses the rider.

If you need to smooth out a dirt road or driveway, or groom your homemade motocross track, there's a variety of graders and blades that can be mounted to an ATV. With these, you can turn your ATV into a giant shovel or a powered rake. If you're doing some gardening, you can till soil or use a seed spreader attachment. Later in the season, you might want to pull a sprayer to apply an even coat of fertilizer.

Since ATVs don't have the cargo capacity of UTVs, cargo trailers can be very useful. Heavy-duty ATVs can pull up to 1,000 pounds (454 kilograms), so the best trailers use large, soft tires that disperse all that weight without sinking into the ground or churning up your lawn.