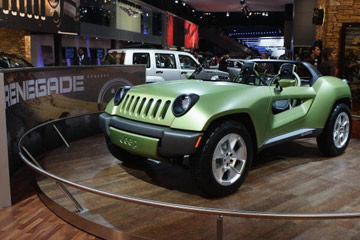 People around the world are going green in droves. As they replace their appliances and light bulbs with more eco-friendly versions, they're also looking to upgrade their vehicles to conserve fossil fuels and save money. Rising gas prices and concerns over greenhouse gas emissions have helped fuel the market for more efficient vehicles. The automotive industry has responded by introducing a range of more eco-friendly autos, including electric cars.

Electric cars aren't a new idea -- they've actually been around since the earliest days of the automotive industry. Back in the 1800s, electric cars outsold gas-powered vehicles [source: Electric Auto Association].Despite its long history, the popularity of the electric car didn't really start to take off until the 1990s because its limited power and battery cost made the vehicle an impractical purchase. It was virtually unthinkable to try to take an electric vehicle off-road until recently. Today, electric batteries (typically lithium-ion or lead acid batteries) are becoming cheaper and lighter. They're also able to take electric cars farther without needing a charge. What's more, manufacturers are using this new technology to create a new breed of electric vehicle that drivers can take on dirt, rocks and just about anywhere else they want to go.

Who says off-road vehicles have to be gas guzzlers? This article shows how manufacturers create electric off-road vehicles that are friendlier to the environment and can almost keep up with their gasoline-fueled relatives.

Off-road all-terrain vehicles (ATVs) and side-by-sides have been given an eco-friendly electric makeover. An ATV is a three- or four-wheeled vehicle with a seat in the center. An example of an electric ATV is ZAP's Dude. It needs to charge for about four to six hours, and then it can travel up to 25 mph (40 kilometers per hour) for a range of up to 25 miles (40 kilometers). The manufacturer says it easily can tackle hills and tow 1,000 pounds (454 kilograms) [source: Zapworld]. Electric ATV's can't travel far because of the need for a recharge, but they can tackle bumpy, rugged ground. That makes them ideal for farmers, ranchers, hunters and rangers who just need to patrol a limited area.

In side-by-side vehicle, the driver and passenger sit next to one another in something that resembles a souped-up golf cart. Polaris' RANGER EV Side-by-Side has an 11.5-kilowatt battery that takes about eight hours to recharge using a standard 110V outlet. The battery can power the vehicle for slightly less than 50 miles (80 kilometers). Its 30 horsepower electric motor can carry it at a top speed of 25 mph (40 kilometers per hour).

Electric off-road vehicles are even being outfitted for military use. The Special Operations Unit of the U.S. Air Force is reportedly testing four prototypes of an electric off-road vehicle. The Clandestine Electric Reconnaissance Vehicle (CERV) can fit inside a military CV-22 Osprey aircraft; once it hits the road it can travel 65 miles (105 kilometers) per hour over a range of 200 miles (322 kilometers) [source: Page] . It can even be modified to include a generator, in case an outlet isn't immediately available out in the desert or wherever the troops may be. Using electric vehicles in combat has advantages -- they're quieter than gasoline-powered cars and they're harder to detect on infrared radar. 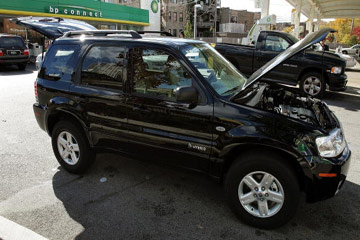 Limted battery life could be a big disadvantage to off-roaders who want to go green.
Tim Boyle/Getty Images

Driving an electric off-road vehicle is also friendlier to the environment. Anyone traveling behind one of these vehicles won't have to choke on gas fumes, because there aren't any.

Another big benefit of driving an electric off-road vehicle is the cost savings. Polaris' Ranger EV costs about $0.035 per mile to operate compared to $0.09 per mile for a traditional gasoline-fueled vehicle [source: Business Wire].

The obvious disadvantage to taking an electric vehicle off-road is the limited battery life. The longest-range vehicles can only take you about 50 miles (80 kilograms) before needing to recharge, which can be a real inconvenience when you're far off the beaten path. The batteries also add a lot of weight, which may make it difficult to go screaming around tight turns.

When it comes to riding electric off-road vehicles, the safety provided is virtually equal to that of other off-road vehicles. However, concerns have been raised over the safety of the batteries themselves. Lithium-ion batteries have been known to overheat, which can lead to a fire or even an explosion. This shouldn't be a concern for much longer, however: Manufacturers are working to come up with safer battery options.

For more information about electric off-road vehicles, take a look at the links on the next page.