Browse the article How the Dakar Rally Works 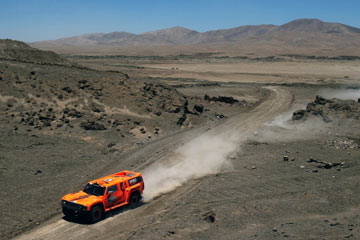 The Dakar is not your grandfather's motor sport rally. But what exactly makes it so difficult? See more truck pictures.
Bryn Lennon/Getty Images

Thierry Sabine was lost, hopelessly lost. It was 1977 and the Frenchman had been riding through the Libyan Desert during a motorcycle rally. After going off course, Sabine looked around him. Despite being in the middle of nowhere, the challenges of crossing Libya on a motorcycle, along with the country's stark beauty, captivated Sabine. He decided to create the ultimate racing event that would test the mettle of thrill seekers such as himself [source: Dakar.com].

A year later, on Dec. 26, 1978, Sabine's brainchild, the Dakar Rally, was born. It soon became motorsport's ultimate endurance race. The 6,000-mile (9,656.06-kilometer) multi-stage race began in Paris in the shadow of the Eiffel Tower and ended in Dakar, Senegal. One hundred and seventy competitors started the race that year, which was won by a motorcyclist named Cyril Neveu [source: Dakar.com].

It didn't take long for the race to catch the attention of automakers, sponsors and fans. For the next three decades, the Dakar Rally became the ultimate off-road sport. Many who participate are adventure seekers. Moreover, car manufacturers often use the rally to test new vehicles. Teams participate in four categories: trucks, autos, motorcycles and quads.

The race has had its share of controversy. In 2008, race organizers cancelled the 16-day event after terrorists killed a family of French tourists in Mauritania, a North African country. Eight of the 15 stages of the rally were scheduled to be held in Mauritania. A year later, the race moved to South America.

The race's official Web site claims "entering the Dakar is, in a certain way, like climbing Everest, sailing round the globe or rowing round the world." However, the Vatican newspaper called it "the bloody race of irresponsibility" [source: Roming].

The Dakar is mesmerizing and thrilling. Competitors are treated to an array of unusual environments, including the grand sand dunes of the Atacama Desert and the awe-inspiring snow-capped Andes mountains. While the sport is exhausting and dangerous, many people rail against the rally believing it harms the environment. Not only do a thousand or so vehicles --including support trucks -- race across the landscape, but millions of spectators flock to the course each year [source: McGowan].

In 2012, Argentinean environmentalists questioned whether race officials were ignoring the environmental damage in their quest to find the most dramatic and challenging course. Environmentalists say many of these areas are not suitable for the avalanche of racers, vehicles and spectators [source: McGowan]. Llamas, flamingos and other animals are often in the way when racers cut across their habitats.

The race also motors through archaeological sites that date back thousands of years [source: Roming]. In 2009, Chile's Council on National Monuments issued a report blasting the race for causing severe damage to the archaeological sites in northern Chile. The report said racers destroyed artifacts such as arrowheads, spear points, human bones and other relics dating between 9000 B.C. and 1500 B.C. [source: Estrada].

Not only are racers damaging the environment, but environmental officials also say the drivers are breaking traffic laws on local roads. One group published a series of online pictures showing Dakar drivers running local motorists off the road [sources: McGowan; Roming].

Critics also charge that the rally spews a huge amount of carbon emissions into the atmosphere. For their part, race organizers say that by 2013 the rally will reduce its carbon footprint directly and indirectly linked to competitors, support crews and others. Moreover, Dakar officials, through various projects, say they have saved almost 296,526.46 acres [120,000 hectares] of Amazon rainforest in Peru [source: Dakar.com].

From the perspective of racing officials, the Dakar rally is throwing environmental and historical protection into high gear.

The Dakar is an economic boon. The rally generates around $271 million, while drawing some 4.5 million spectators. Moreover, 70 broadcast outlets from 190 countries televise the race to 1 billion viewers around the world [source: Dakar.com].

All sports have an iconic figure, and Thierry Sabine is a legend among rally fans. He died in a helicopter crash on Jan. 14, 1986 as the eighth edition of the Dakar Rally was underway. Sabine was a daredevil from the get go, driving in various rallies and circuit races across the planet.