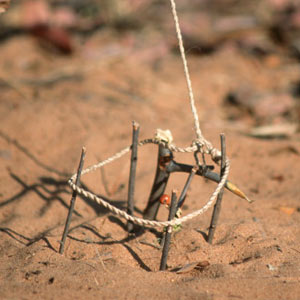 If your ide­a of animal trapping is a cardboard box propped up with a stick attached to a string, it's probably time for you to stop watching cartoons and learn how real trapping works.

Animal trapping, whether for food or fur, has been a part of human culture for thousands of years. It involves the use of a trap to catch an animal in its natural habitat, and can be applied to anything as small as a mouse and as large as a bear. During the Ice Age, people trapped for fur pelts to protect from the cold. Today, people trap for survival, sustenance and money. Trapping is also sometimes used for animal control -- think of the common mousetrap.

Sport trapping is now carefully regulated by individual state agencies in the United States, with various laws determining how, when and what people can trap. There are also still some modern-day fur trappers in existence, but since most fur is taken from animals raised on farms, their numbers are dwindling.

There are five basic types of traps that trappers can choose from: body gripping traps, snares, foothold traps, cages and glue traps. Though trapping requires a bit of work and patience up front, it can be very efficient and safe for the trapper because he doesn't need to be in the immediate vicinity of the animal until after it's been caught.

­However, for all of trapping's benefits, it has its detractors. Animals that get a limb caught in a trap's jaws can sit in pain, and some animals have even been known to chew their limbs off to escape traps.

Before you get both sides of the great trapping debate, it's important to get a little background behind this legal, regulated outdoor activity. Click on the next page to start at the beginning -- the history of trapping.

Trapping has existed throughout the history of man. During the Ice Ages, when much of the world was covered in glaciers, people needed warm covering­s, which came in the form of pelts from trapped animals.

­In the United States, fur trapping was a very popular industry as pioneers settled the land. Fur trapping and trading occurred as early as the 1600s in North America, and in 1670, the fur-buying company Hudson's Bay Company was founded in Canada [source: Wild About Trapping]. When Lewis and Clark explored the Louisiana Purchase, one of their tasks was to recount the various furry animals populating the wilderness.

Fur trapping often led to greater exploration of the growing country as mountain men set out to find more animals. As they would expand, explore and settle, others would follow, establishing trading posts and fur outfits farther and farther westward.

As the country expanded, trappers not only were able to be commercially successful, but they helped their fellow citizens as well. As people settled farther into the wilderness, they came into more contact with the wild animals. Trapping helped control animal populations that would come in contact with crops, livestock and sometimes people.

Since pioneer days -- and certainly since the Ice Age -- trapping has changed quite a bit. Read on to find out the technology behind modern trapping.

Sears, formerly known as Sears Roebuck & Co, used to be one of the biggest fur-buying companies in the United States. To promote its furs, the store created a booklet written by Johnny Muskrat called "Sears Tips to Trappers." Each week Johnny Muskrat also narrated the fur market broadcast on the radio. The store also hosted a National Fur Show each year beginning in 1926 to award prizes -- such as cars -- to the best trappers. The show -- and the fur buying -- was halted in 1959, however, when Sears decided to switch from a rural focus to the urban market [source: Fort Green Museum].

­Though trap­s can still be as simple as a hole in the ground, they've come a long way since their early days. And while individual commercial fur hunting has declined, people still trap for personal use, whether for fur, meat or to rid themselves of a problem animal.

Today's traps come in literally hundreds of sizes and styles, from collapsible traps to plastic ones, easy set traps to professional ones -- even a padded foot trap for raccoons.

Though foothold traps are often what people think of when they think of trapping, cage traps are becoming more popular - they're the trap of choice if you're planning to catch and release an animal. Modern cage traps are often made of galvanized steel wire mesh so they'll withstand the elements. Cage doors are carefully spring-loaded so they can automatically lock after the animal steps into it. The spring loading also helps it to lock into place quickly, before an animal has a chance to escape. Cages will also include protective sheets underneath the safety handle in order to protect the trapper when he or she goes to retrieve the animal. You can even add wheels for easy transportation. Cage traps are often more expensive than other types of traps, as they can range from less than $50 for rat, chipmunk and squirrel traps to almost $500 for large dog traps [source: Tomahawk Live Trap].

However, although trapping can be a nice outdoor activity -- or a useful one to catch that annoying skunk hanging out on the edge of your property - it's carefully regulated by state departments of natural resources. Check out the next page to learn about trapping laws.

Urine is often a popular addition to trap sites, especially if you are hunting fox or coyote. Many trappers recommend having a squirt bottle to apply the urine, which is helpful for attracting the animals. Good thing humans aren't attracted the same way!

Trapping laws vary from state to state, so it's important to carefully review your state's trapp­ing laws and regulations before you begin. Some states have even banned leghold and foothold traps, so you may have to alter your methods depending on where you are.

­Many states support trapping as a legitimate outdoor activity necessary to control the wildlife population and damage to people and their property. However, people must apply for a license to trap and trap in season for the animal they are seeking. There are no age limits on trapping, but many states recommend age 12 to complete successful trapper education courses before buying a trapping license. Some states, such as Wisconsin, offer nonresident trapping seasons for some animals. However, Wisconsin offers this option only to residents of states that allow Wisconsin residents to also purchase nonresident trapping llicenses. There are exceptions for people from Hawaii, Michigan, Minnesota or Washington, D.C., who want to trap in Wisconsin [source: Wisconsin Department of Natural Resources]. Such states may also require trappers to complete their state's trapper education course, or a home-state equivalent.

Many states also require that trappers check most types of traps at least once a day so that animals are not left in traps or cages for an extended period of time. Some states don't require regular review of traps under the ice; however states like New Hampshire mandate that ice traps must be visited at least every 72 hours [source: New Hampshire Fish and Game Department].

Whatever the laws and regulations of the area in which you're trapping, be sure to carefully review the limits of land of your trapping area. Respect private land, and always ask a landowner before placing a trap on an area that is not specifically marked as open for trapping.

Why is trapping so important? Read on to find the thoughts behind the argument in favor of trapping.

Be sure to carefully review all of the complete laws for the state you are trapping in. Many continually revise rules about trapping in certain areas of a state in order to avoid -- and hopefully eliminate -- incidental take of an endangered species.

Arguments in Favor of Trapping

Trappi­ng is considered an enjoyable activity for many who partake in it, but it also serves a valuable purpose in many less-urbanized areas.

­As the human population grows and spreads, less true wilderness is available for wildlife. Some of these wild animals can come into contact with humans -- sometimes merely as a nuisance to crops, but other times more dangerously as a threat to humans. Trapping can help minimize such conflicts. In addition, trapping can control predators of threatened species by relocating the predators to places where the population is better balanced. Unlike hunting, trapping allows for the catch and release of a problem animal. Trapping is also safer than hunting because the trapper is removed from the animal when the trapping happens. Diseased animals can also be trapped without death before the disease is allowed to spread. Once it's well again, the animal may be rereleased into the wild.

Those who abide by the regulations set forth by their state agencies can be very ethical hunters. They stick to their limit, trap only within proper hours and seasons, and regularly check their traps -- at least once a day, if not more -- in order to keep up with best trapping practices.

However, trapping is still a controversial activity. Even those trappers with the best practices and best of intentions can still harm animals. Read on to find out why some people find trapping inhumane.

Scientists also use trapping to study animals. It allows scientists to study their habits, habitats and migratory patterns. The padded leg trap is a type of trap often employed by scientists to allow for the most humane capture of the animal in order to study it [source: Association of Fish and Wildlife Agencies].

­Even with something as small as a mousetrap, traps can go bad. You may have had an experience with a common household snap trap in which the animal only got ­caught by a portion of the trap and didn't die instantly. Such things can also occur with other outdoor traps, causing an animal to suffer. This is one of the reasons trappers are supposed to check their traps often.

And although there are rules and provisions to try and protect against accidental trapping, traps are not intelligent -- sometimes capture animals they're not meant to. They aren't like hunters, who knowingly aim only for a buck or a pheasant. Threatened and endangered animals can become trapped, as well as domesticated animals. In some rural areas, humans have to be careful to avoid large foothold traps intended for bears and other animals. In catch-and-release cages, it may not be as much of an issue if the incorrect animal is trapped, but it can still be extremely stressful and detrimental to a wild animal's health to be locked up in a tiny cage for an extended period of time.

Though trapping can be very useful and very humane, even the best intentions sometimes have unintended negative outcomes -- in this case, animal cruelty. The complex issue of trapping is not likely to be determined anytime soon, so for more information, visit the links on the next page.

Glue traps were once thought of as a more humane alternative to mousetraps that snap and kill the mice on contact. However, many people now think otherwise. In order to free themselves from the glue, trapped mice have pulled out chunks of their own hair to escape and have even bit off their own legs. If the mouse's face becomes stuck to the glue, it can slowly suffocate and starve. A 1983 test also showed the glue to irritate and scar the mice's eyes, and also that the extreme stress and fear caused the mice to become covered in their own excrement [source: In Defense of Animals].