What is still hunting? 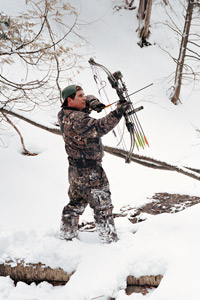 You'd think that something called "still hunting" would mean hunting from a still, stationary position. Not quite. Unlike many hunters who sit in­ tree stands for game to come around, still hunters are expert trackers who don't sit still at all. They prowl like animals and stalk their prey through the thick undergrowth in woods, overgrown fields, river bottoms and marshes. They walk very slowly, use the wind to their advantage and blend into the environment.

The name instead comes from the slow, deliberate movements that still hunters make. Walking in this sport is nothing like hiking. When the hunters walk, they place each footstep carefully to avoid snapping twigs or crunching leaves, but the reality is you can't be absolutely silent. There are all sorts of noises in the woods, and the key to still hunting is how you deal with the noise. Each step is precise: Still hunters alternate between taking one to two steps and 30 second observation­al pauses. Still hunters spend 90 percent of their time watching and listening [source: Gnatkowski]. With that kind of pace, a hunter may cover no more than 100 yards (91 meters) in an hour [source: Licata].

What are hunters looking for during all that time? Signs of life, animal tracks, bedding, an outline of an animal or even just an ear or antler. They may spy movement. This information is key to a successful hunt, and with it, expert still hunters may find themselves within 30 yards (27 meters) or less of the kill. Think of that in football terms -- a football field is 120 yards long and the end zone is 10 yards deep. Still hunters go one on one with an animal in an area not much bigger than the end zone.

A successful still hunt requires focus on and off the field and considerable preparation. Next we'll learn about the art of scouting, still-hunting gear and the right conditions for a still hunt.

Still Hunt: On the Prowl 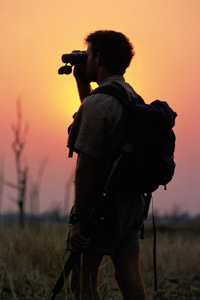 How a still hunter behaves while on the hunt is i­mportant, but just as important is the prep work: scouting, bringing the right gear and picking the right day.

Scouting gets the hunter familiar with the lay of the land before the hunt begins. The best time of year to scout is debated among hunters -- some prefer to scout shortly before the hunt while others find off-season scouting the most helpful. Regardless of when a hunter goes scouting, it's important to do so because this is when the hunter studies the surroundings and the details of the area, including particulars such as food and water sources, bedding areas and game trails.

In addition to scouting, a detailed topographical map and a compass will be essential during a still hunt, as will a short list of gear: binoculars, a knife, food, a flashlight and warm, quiet clothing. A still hunter will have good orienteering (navigational) skills and generally be comfortable in the woods -- this is just as important in still hunting as knowing how to use your weapon.

The type of weapon used in a still hunt is as varied as any other hunt and ranges from bow and arrow to firearms (rifles, shotguns or muzzleloaders). Since shots are usually taken at close range and in thick brush, a short firearm with a low-powered scope is a popular choice. Pick a weapon and get comfortable with it, and be sure to get the proper license. Every state has its own set of hunting rules -- different weapons are approved for use during different times of the season.

Although it's uncomfortable, still hunters have good luck in bad weather -- a light rain is good at muffling your sound but a light snow is even better because shapes and colors stand out against the white.

Sometimes luck can work against you, though. Even an expert hunter who has scouted and brought along the best gear and weaponry can be undone by a simple gust of wind or ray of sunlight. Thick cover and shadows are useful to camouflage a still hunter from sight. And then there's the wind. By keeping aware of wind direction and keeping it in their favor, hunters on windy days can help disguise their noise; a hunter can mask his or her scent by walking directly into the wind.

No matter what type of hunting, still or otherwise, remember the ultimate goal is to see the game before the game sees you.

Hunter orange clothing is highly visible, solid fluorescent orange and comes in hats, coats, vests and pants. Many animals, such as deer, aren't able to see it since their sensitivity to various wavelengths of light differs from humans. Most but not all states require hunters to wear hunter orange. A study of hunters in New York found that 81 percent of hunters wear hunter orange. But those 19 percent who don't? Well, 94 percent of those have been involved in game accidents [source: Vermont.gov]. While camouflage may mask your presence in the woods, wearing hunter orange may save your life.

What is the best hunting-dog group and why?
What's so bad about fox hunting?
How Hunting Trophies Work