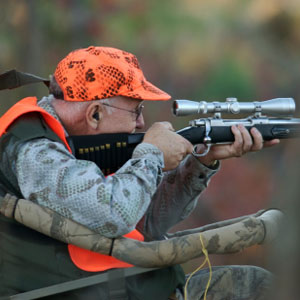 A novice hunter walks into a gun store to buy a new hunting rifle. He asks lots of intelligent questions and examines each rifle carefully. The store owner asks the novice about the type of game in which the hunter is interested. Together, the store manager and novice look at the ammunition best suited for the game of choice. After careful consideration, the hunter purchases an expensive rifle, dropping more than $1,000 with a smile. Just before the store owner can ring up the purchase, the hunter adds a $50 rifle scope. The store owner pauses for just a moment. Then he sighs, rings up the purchase and the novice walks out of the store cheerfully.

What the novice hunter in our example doesn't understand is that the quality of a rifle scope can be more important than the quality of the rifle. A hunter can hit a target using a mediocre gun with a great rifle scope. But a hunter using a poor scope will have trouble hitting targets even with the best rifles on the market.

­If you're not familiar with rifle scopes, they can be a little intimidating. They come in many different varieties. The type of scope you'll need depends heavily on the type of shooting you want to do. For example, a target shooter and a deer hunter will need different kinds of scopes.

To make matters even more complicated, no two rifles are exactly the same. Even if you compare two rifles made by the same manufacturer that are only one serial number apart, you'll find that each has its own quirks and traits. In other words, you can't mount the same type of scope to two different rifles the exact same way and expect matching results -- you're going to have to tweak your scope's settings.

We're going to unravel the mystery of the rifle scope. We'll learn how scopes can help you hit what you're aiming at but you're going to have to do a little work on your own. Let's start in the next section by taking a close look at the parts of a rifle scope.

Parts of a Rifle Scope

Rifle scopes work like telescopes. Light passing through the objective lens focuses on a point inside the scope. The ocular lens magnifies the light from the focal point. When you look through a scope, the image you see is that light. Rifle scopes also have a reticle, also known as a crosshair. The purpose for these markers is to show the shooter exactly where the shot will go once he or she pulls the trigger.

Some scopes have multiple settings that allow you to view targets at different magnifications. For example, a scope might allow you to view targets from 3x to 9x your normal vision. That means if you set your scope to 3x magnification, any object you view through the scope will appear three times larger than if you looked at it without the use of the scope. These scopes have a feature called a power ring. Turning the power ring changes the magnification setting on the scope.

Most manufacturers set their rifle scopes so that they're focused at 100 yards (91.4 meters). That means when aiming at an object 100 yards away, the target should be clear. But switching magnification settings can introduce parallax error. With rifle scopes, parallax error is when the aim on a scope changes if the position of the shooter's eye changes. The rifle can remain perfectly still, but by shifting your position it will look like your aim is off target. Parallax error becomes a problem at high magnifications -- most hunters won't ever have to worry about it. Some manufacturers build rifle scopes with adjustable objective lenses that can correct for parallax error.

The main body of the rifle scope is the tube. There are two main diameter sizes of tubes for rifle scopes: 1-inch tubes and 30-millimeter tubes. It's important to know the diameter of your scope's tube so that you use the correct mounting rings when you attach the scope to your rifle.

Now that we know the basic anatomy of a scope, let's look at the different kinds you can buy for your rifle.­

Put on a Coat

Some scopes have special coated lenses. Coated lenses have a thin layer of synthetic material that reduces glare. That means the lens reflects less light, allowing more light to pass to your eye. 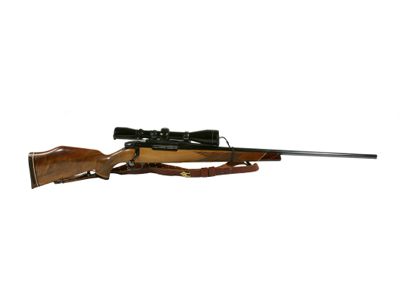 A rifle and scope
Angela Hill/iStockphoto

Some people confuse rifle scopes with gun sights. A good rule of thumb is that a rifle scope provides some level of magnification, whereas a gun sight doesn't. Both devices help shooters take aim at a target. Some sights are very simple, while others use lenses similar to a scope's lenses. Here's a brief rundown on common sight types:

The number 42 refers to the size of the objective lens: 42 millimeters. The size of the lens will tell you how much light it will be able to transmit to the ocular lens. In general, larger objective lenses can transmit more light. But it's not always critical to have a large objective lens -- you only need a large lens if your scope uses high magnification levels in the 14x to 36x range. For most shooters, a 40-millimeter lens is sufficient.

The type of scope you need depends on the kind of target you plan to shoot. If you plan to hunt big game at a distance of around 100 yards (91.4 meters) or less, you won't need a high-power rifle scope. Anything more than 7x or 8x is unnecessary. If you'll be shooting from a greater distance, you'll need a more powerful scope. For example, if you'll be more than 200 yards (182.9 meters) away from your target, you'll need a scope in the 12x magnification range.­

Obviously, the terrain around you will help determine how far away you'll be from your targets. In heavily-wooded areas, you won't be able to see as far as you would on an open plain. If your preferred hunting grounds are dense forests, you won't need a very powerful scope.

You can even find special night vision scopes that incorporate an infrared illuminator. If the game you want to hunt is nocturnal, a night vision scope might be your best option. Learn more in How Night Vision Works.

After purchasing your scope, you'll need to attach it to your rifle. Let's take a look at the process of mounting a rifle scope. 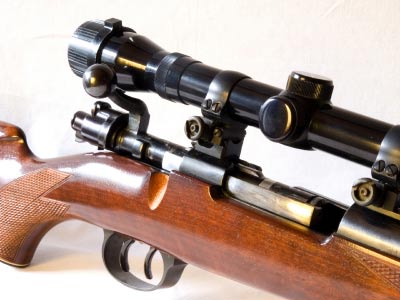 A scope on a Kettler Thirty-Aught-Six bolt-action rifle.
Georg Hanf/iStockphoto

Befo­re mounting the scope, you should hold your rifle in the position you'll be using while taking aim. Make sure it's a comfortable position -- you don't want to suffer a muscle cramp while you're preparing to fire. Pay attention to the way you position your head and neck. You'll want to mount your scope in a way that complements your posture.

The next step to mounting a scope to a rifle is to make sure you have all the equipment you'll need. That includes the scope, the unloaded rifle, the scope mount or base, the mounting rings and a set of tools including screwdrivers and an allen wrench. You should also work in a clean and well-lit environment. If your rifle isn't equipped for scope mounts, you may need to take it to a gunsmith first.

­There are several different styles of scope bases. They include the Weaver, Picatinny, Redfield/Leupold and clamp-on mounts among others. Some rifle manufacturers build a scope base directly in to the receiver -- the part of a rifle that houses the firing mechanism and ammunition feed system. You connect a scope base to a rifle with either clamps or screws, depending on the type of base. It's important to match your mounting rings to your base as well as your scope -- mismatched equipment can cause serious problems later.

You'll need to secure your rifle in a gun vise before getting to work. Apply a light layer of oil to your rifle's receiver and the bottom of the base and rings. Follow the instructions for the type of base you've chosen. Use the right length of screw for each hole. Attach the base to the receiver, then the bottom half of the mounting rings to the base. Make sure all connections are snug and secure.

Take the rifle to an area where you can set up a target approximately 25 yards (22.9 meters) away. Remove the bolt on your rifle, install a bore sighter in the rifle's muzzle and look down the bore of the rifle. Adjust your scope to its highest magnification and place it onto the bottom half of your mounting rings. Fit the top rings over the scope and secure them loosely so that you can still adjust the scope's position. If you can position the scope's reticle to the approximate center of the bore sighter's reticle without tweaking the adjustment settings on the scope itself, you're in good shape. Otherwise, you may need to change the position of the mounting rings using the scope's knobs or screws and try again. It doesn't have to be perfect, but it should be close.

Next, we'll look at how to sight in a scope so that your aim is as accurate as possible.

Will you be sitting when you take aim? Kneeling? Prone? You should get into that position before mounting your scope -- a good scope mount for one position may not work as well for another. 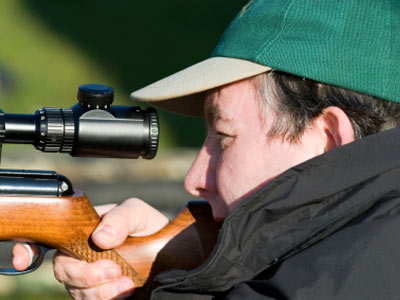 Eye relief refers to the distance from a shooter's eye to the scope's eyepiece.
Martin Lovatt/iStockphoto

The process of aligning a scope­ is called sighting-in. It takes time and patience to sight-in a scope properly. But all that time and effort will pay off when you can fire at a target and have confidence that your shot will be true.

Does your rifle have a lot of recoil? If so, you need to be sure you have enough eye relief. That's the space between the end of the scope and your eye. Eye relief is usually more of a concern when firing a handgun or shotgun, but it's something to keep in mind.

Tighten the screws on the mounting rings so that your scope is secure in the mount. Take turns tightening each side of the rings in short increments. You want to make sure the gap between the top and bottom halves of the mounting rings is the same on all sides.

Now load your rifle, take aim at the target again and fire off a few shots using one of the types of ammo you've brought. Make a note of where your shots group on the target. Switch to a different kind of ammo and repeat this process. If your shots with one type of ammo are closer to the center of the target than the other, you know which ammo you should use in the future.

Now you can fine-tune your scope's settings so that your shots hit just above the center of the target. This will ensure that you'll be able to hit a target whether it's at close range or hundreds of yards away. Congratulations, you've just sighted in your rifle's scope!

Remember to do your homework before you buy and mount a scope to your rifle. Keep in mind the kind of shooting you'll be doing, the environment you'll be in and the budget you have to spend on a scope. And always remember that it's better to splurge a little on your scope purchase -- it's an investment that will save you frustration in the long run.

To learn more about rifle scopes and related articles, take aim at the links on the next page.

Remember that there should be a gap between the two halves of the mounting rings around your scope -- you should never tighten screws so that the two halves meet.