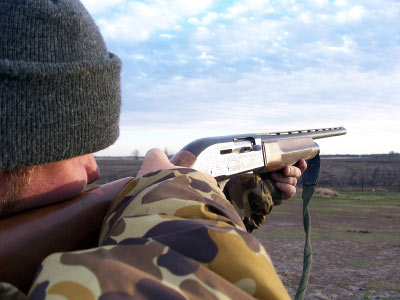 The forest is perf­ectly still. The smell of pine needles and rotting leaves rises into the frosty morning air. The air is so quiet you can hear your heart beat. Suddenly, just in front of you, something rustles. Even before you see it, you instinctively know: This is it. A massive whitetail buck steps into the clearing.

For many sportsmen, rifle hunting is the source of the most idyllic moments possible -- a combination of personal achievement, ethical sportsmanship, connection with nature and beauty. For many others, it's just a pipe dream -- a frontier way of life that now seems too distant to pursue.

What makes a gun a rifle? The term "rifle" is sometimes thrown around to mean any firearm fired from the shoulder. But technically, what makes a gun a rifle is the rifling -- a series of spiral grooves cut into the inside of the barrel. These grooves make the bullet spin when it is fired from the barrel. That spin is important because it improves the bullet's range and accuracy. Think of the way a perfect football pass spirals through the air. Try throwing a football without spin: It flies more slowly, which means it can't travel as far, and it strikes its target with less force. The same principles apply to rifle projectiles.

Rifles are classed based on their action (bolt action, pump action, lever action, etc.) and the caliber, or size, of ammunition they fire. Caliber is usually given as a number -- the diameter of the gun's bore in millimeters or inches. Further specifications might include the number of powder grains the cartridge case is designed to hold. For example, if you're talking about a .25-06 Remington, the first number refers to the caliber. In this case, the gun has a bore with a quarter-inch diameter (6.35 mm). And the cartridge case is designed to hold -- you guessed it -- six grains of powder.

This article takes a look at the development of rifles and rifle hunting, and the historical trends that have shaped modern-day hunting. You'll also learn some strategies to take out into the field and the ethics of hunting. Read on.

No one is entirely sure who invented guns. They seem to have come about when European armies began looking for ways to use Chinese gunpowder. In fact, the hist­ory of rifle hunting begins with turning military technology into practical peacetime uses.

The first guns were essentially miniature cannons -- metal tubes that used gunpowder to force a ball-shaped lead projectile forward. They fired with fuses rather than triggers. In the 16th century, the English Civil War saw the first attempts to make these weapons more practical for foot soldiers, which led to the development of the trigger and a series of firing devices -- the matchlock, the Wheelock and the flintlock. These early weapons still had numerous problems with accuracy, and in some cases soldiers simply gave up and threw the gun at the enemy [source: Global Security].

Rifling -- cutting grooves into the barrel to improve shooting accuracy -- is another development for which no single person gets credit. The practice was widespread by the American Revolutionary War and well established on the hunting scene as well.

A drawback of the rifle was that gunpowder tended to accumulate in the grooves, which made cleaning the barrel difficult. The speed of loading bullets was another concern -- both for hunters and soldiers. At most, a trained marksman could fire only three times in a minute.

The integrated cartridge -- which combined the bullet, primer, powder and the firing charge within a casing -- was developed in France in the early 1800s. Cartridges dramatically reduced the loading time required for rifles. The rest of the century saw further improvements in the way rifles were loaded and fired, including breech-loading mechanisms and refinements to cartridge design. Unsurprisingly, many of these improvements were developed and standardized on the battlefield and then found their way into other aspects of life.

In North America, rifles were as important for self-defense as they were for procuring food. A culture of hunting and marksmanship flourished in the American colonies and continued roughly until the close of the frontier, which was around the end of the 19th century.

In the 1890s, bolt-action rifles came onto the scene. The bolt-action rifle used magazine cartridges. It was efficient and trusty, easy to load and maintain. It remains a favorite still today.

So when we hunt, are we doing anything different from what our forebears did? Read on to find out.

In some parts of Europe, "rifle hunting" sounds like a contradiction. "Hunting" means pursuing game with hounds, not with guns. If you're firing a gun, the sport is properly called "shooting." For the sake of clarity, we're using "hunting" to refer to the pursuit of game, regardless of whether you go about it with dogs, guns or butterfly nets (Hint: Do not use butterfly nets on big game. You will get hurt.) [Source: Encyclopedia Britannica].

The techniques of rifle hunting haven't changed substantially since World War II, whic­h saw the debut of the German Sturmgewehr-44 (or StG-44), the first assault rifle. Shortly thereafter, assault rifles became available to civilians in some countries. In the United States, hunters began using semiautomatics, especially the caliber .22 rimfire. (Note that in many areas, hunting with semiautomatic rifles is illegal or considered highly unsportsmanlike.) However, for all intents and purposes, most modern-day rifle hunters still use the same bolt-action technology that was popular in the last days of the American frontier.

What has changed, though, is the land itself. The human population is in an increasingly tenuous relationship with animal populations. Some areas, unfortunately, are now dealing with the consequences of overhunting, and some places still struggle to prevent overhunting and poaching.

There's no question that modern rifle hunting is more complicated than it was in the days of Davy Crockett. The modern rifle hunter must deal with licenses, permits, seasons and other regulations before ever sighting a deer in his scope. Many species are now protected by law. Others will never be hunted again -- because they have vanished from the planet.

It may come as a surprise that the rifle hunter may one day be added to the Endangered Species list. In fact, the number of hunters in the U.S. has been declining for almost four decades [Source: Marshall]. Hunting used to be one of the defining American activities. Today, only about 3 percent of Americans hunt, and demographic trends indicate the number will continue to drop.

Ironically enough, urbanization is one of the major culprits here -- as it is with the extinction of other species. Fewer people have contact with nature, and a smaller percentage of people live close to hunting grounds. Contentious issues of urban gun violence have attached a social stigma to firearms that can be challenging even for the seasoned hunter.

The American culture of hunting may have hope, however, in the environmental movement. Hunters have a vested interest in preserving our wildlife and wildlife habitats, and they may be able to find new common ground with current efforts to create a greener country.

Enough about the hunting culture; what actually happens when you put your hands on the rifle? Read on.

It's a myth that hunters don't care about wildlife preservation. Many hunters are ardent conservationists. "Hunters are the most willing to give their dollars for wildlife conservation," says Mike Checkett of the nonprofit Ducks Unlimited. Some hunters are also devotees of the slow-food and local-food movements, both of which seek to celebrate and preserve biodiversity [source: Marshall].

Not so fast. The most important part of rifle hunting strategy happens long before you put on your orange vest. It's called preparation. It means practice -- and lots of it if you're going to make an ethical kill.

Let's take a look at what constitutes an ethical kill in rifle hunting:

At the most basic level, ethical hunting demands precise shooting. This is less a question of equipment than of practice. Of course your rifle should be in good working order, and you should invest in the equipment that helps you shoot well. But the sleekest, fanciest new rifle won't help you fell a deer on the first try if you haven't put in time at the shooting range. You should be thoroughly familiar with the kill zone of your game of choice -- the relatively small area that contains the heart and lungs -- and you should be able to hit it on the first try.

Several hunting experts, such as Chuck Hawks, argue that you're better off with one familiar rifle that you've used so much it feels "like an extension of your arm." A familiar rifle is far less likely to surprise you because you know its typical bullet trajectory, its kick and how to place shots. One expert, Glenn Harmaning, suggests that a .25-06 Remington with a 24-inch (61 cm) barrel is adequate for almost any North American game.

Even if you're only using the one rifle, you have some choice in bullets. The rule of thumb is to suit the bullet to the game, of course. Especially for large or potentially dangerous game, Hawks suggests starting at the maximum recommended caliber, since "there's no such thing as too dead." Also think about why you're hunting. If you're looking for trophies or pelts, use a pelt-saving bullet -- Tom Armstrong recommends a Barnes solid 90 grain -- to make sure your technique isn't at cross-purposes with your goals.

With enough preparation and a sportsmanlike approach, you can enjoy a safe, fulfilling and ethical hunt.

Do you need to spring for a premium bullet? That's up to you and your wallet. But, again, you should look for an ethical bullet. Remember that the bullet keeps moving after it hits the animal. This impact damages both the bullet and the animal. If the bullet is effective, it doesn't stop there; it penetrates all the way to the kill zone. For this to happen, the bullet needs to retain most of its weight when it hits the animal. Typically, bonded and controlled-expansion bullets have higher weight retention.