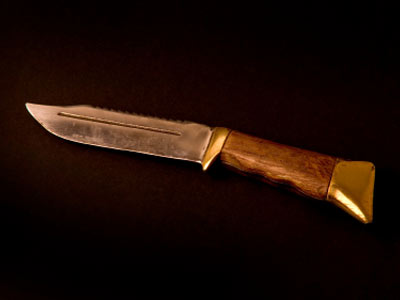 No h­unter would be fully equipped without a knife. Your blade is essential for field dressing, skinning and preparing game, as well as for safety. Regardless of what you're hunting or where you're hunting it, the knife is an invaluable tool.

On rare occasions, the knife also becomes a weapon. It depends on the circumstances, of course, and on the knife. It could be catastrophically foolish to attack game with a knife designed only for dressing meat or blazing trails. However, if you have the right knife, nothing brings you closer to the prey, or lets you experience the hunt more immediately. For many knife hunters, nothing provides a greater thrill.

Knife hunting has an obvious drawback: Unless you can throw knives with the precis­ion of a circus performer, you have to get quite close to your prey to stab it. That can be dangerous. It also limits the kinds of prey you can pursue -- you wouldn't use a knife to attack a moose, for example.

­Most contemporary knife hunting focuses on the wild boar, a violent, powerful and intelligent foe. The hunt may or may not involve dogs. It always involves danger. For knife-hunting aficionados, though, the danger is part of the appeal.

The knife has evolved from a crude stone implement to an advanced blend of metals. Many of today's methods of creating knives combine Western techniques with those perfected in the forges of the Japanese samurai; contemporary manufacturers such as Global and Kershaw are still affiliated with foundries in the same region of Japan that once armed the samurai.

This article takes a look at the development of knives and knife hunting, and the historical trends that have shaped modern-day hunting. You'll also learn some strategies to take out into the field, as well as the all-important ethics of hunting. Read on.

Knives are among the oldest weapons known to man. We've had som­e version of the knife since the Stone Age, when primitive hunter-gatherers chipped flakes from the sides of wedge-shaped stones to form blades [source: Encyclopedia Britannica]. Other early knives were made of bone or shell. Just like knives today, these early knives were sharpened on stone.

By any standard, the Bowie knife (sometimes affectionately called the Arkansas toothpick) represents a major development in the history of the hunting knife. There was, in fact, no single Bowie knife; Jim Bowie owned and modified a series of knives until he had one that met his needs, which involved at least as much hand-to-hand combat as hunting. The Bowie knife has a large fixed blade and a clip point. Many Bowie knives feature an S-guard, a serpentine piece between the handle and the blade designed to deflect your opponent's blade from your hand. This feature is, obviously, less important when you're hunting animals, who tend to be unarmed.

Another major development in hunting knives also occurred in the 1800s: the Swiss Army Knife, the folding knife that put an entire miniature toolbox in your pocket. If you're using a knife as your primary hunting weapon, it's unlikely to be a folding blade like this one. But many contemporary hunters still carry some form of folding knife for field dressing, butchering, and general-purpose camping and woodsmanship.

How do people hunt with knives nowadays? Read on.

Parts of the Knife

You're familiar with the blade and the handle, of course, but if you're serious about knives you should know how to discuss their other parts.

Today's kn­ives are a far cry from their Paleolithic ancestors, of course. Hunters might use stainless steel, or high-carbon, high-molybdenum or high-chromium steel alloys [source: Fisher]. A serious hunter might have a knife custom-built to his or her preferences like James Bowie.

Few contemporary hunters attack prey directly with the knife. Even if you don't like handling firearms you can still achieve a safe distance with a crossbow or bow and arrow. These weapons -- or, of course, a rifle -- allow you to hunt a far wider range of prey. In fact, modern-day knife hunters more or less stick to one species: the wild boar.

A wild boar, or razorback, is several hundred pounds of uncontrollable fury. The largest ever known to be killed (by pistol, not by knife) weighed in at just over 1,000 pounds (453 kilograms) and measured over 9 feet (2.7 meters) long [source: Brumbeck]. In other words, a wild hog can be as long as a Harley-Davidson hog, and twice as heavy.

A boar charges, thrashes and bites. Its four sharp tusks can be up to 5 inches (12.7 centimeters) long, and just as you've been sharpening your knife, it's been sharpening its tusks by rubbing them on trees [source: Dewey]. It can reach speeds of 25 miles (40 kilometers) an hour [source: Australian Hunting Adventures]. Most intimidating of all, its chest is heavily armored with a thick, scaly hide that can deflect even the sharpest blade. Hunting a boar with a knife demands physical strength, courage, fast reflexes and precision all at once. Many boar hunters also carry rifles, handguns or bows.

In the United States, wild boars are considered invasive. They destroy crops and other vegetation [source: USDA]. They aren't native; they were introduced as game and then -- as feral pigs tend to do -- rapidly got out of hand. Because so many game and natural resources departments consider boars invasive, you often don't have to deal with restrictive laws dealing with such considerations as weight limits. (Not that you shouldn't check anyway; many states do observe boar hunting seasons.)

Wild boars are also hunted in the Australian Outback and in some parts of Asia. Boar hunting in Australia tends to involve dogs, which we'll discuss more on the next page.

So what about the skilled part of the hunt? Read on to learn more.

Hunting with dogs is gaining in popularity in the United States, especially in the south. However, they're not welcome at every hunting ground, particularly if they're aggressive enough that they may hurt other animals. Remember that you're responsible for your dogs' actions. Likewise, disciplining another hunter's dogs may be a breach of etiquette. If a dog is dangerously out of control, get it safely leashed, but then wait for the owner to take over [source: Wild Boar USA].

If you're hunting with dogs, you have two basic approaches. In both cases, the dogs pin the boar, usually by clamping its ears in their jaws. In the first approach, y­ou grab a leg or legs, flip the boar onto its back and expose its underside so you can stab it. In the second approach -- which you might employ if the surroundings don't give you much room to maneuver or if the boar's strength or weight is especially challenging -- you stab the boar from above to weaken it before you flip it over. Then you deliver the death blow from the underside [source: Australian Hunting Adventures].

If you're hunting on your own -- or if your dogs are trained merely to flush the boar from the bushes, not to pin it -- you wait for the boar to charge, and then you face it head-on. You push it to the ground, and stab it. No wonder knife hunting is considered a test of courage!

With or without dogs, you there are several ways you can prepare to improve your chances of success.

Remember -- stay prepared and keep your hunt clean and ethical. You're on your way to one of the great adrenaline rushes of hunting.

Tony Cascarella is the undisputed champ of hunting boars by throwing knives. With three perfectly thrown blades he felled a 275-pound (124.7 kg) boar. More than 30 years later, his record still stands. However, it didn't come by luck. Cascarella was a combat veteran (of the Korean War) and a trained marksman, not only with knives but also with bow and arrow, rifle and tomahawk [source: McEvoy].