How Hunting with Dogs Works 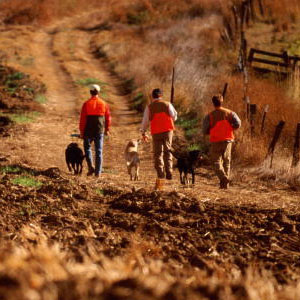 So, Rover finally mastered fetch? If you're a hunter, it's probably time to see what other tricks he's good at -- maybe you should see if he can help put dinner on the table for a change. Fetch is similar to retrieving in hunting, when a dog is responsible for tracking down the hit game and bringing it back to his master.

Hunting as a sport is controversial, so anytime you examine a facet of the sport you have to touch on the ethics. There are those who live to hunt and those who believe it to be cruel if it's not done out of necessity. To the latter, hunting for sport with dogs is inhumane.

If you want to discuss the ethics of hunting with dogs, you might want to look at it from this angle. Many hunters choose to hunt by the rules of fair chase hunting, which states that sportsmen should never have an unfair advantage over the animals they pursue. The question is, does using a dog provide an unfair advantage? This is just one of the topics this article will touch upon.

We'll also examine the long journey dogs have taken to become the hunters they are today, dating back tens of thousands of years. Then we'll move into what breeds are best for hunting and which hunting strategies call for the use of canine aid. We'll wrap up by discussing the platforms for those in favor of dog hunting and those opposed, but not before giving some quick tips on training your versatile pet.

Are you ready to jump into the action? We should start by taking a look at how dogs began hunting in the first place. Check out the next page for information on dog hunting history.

History of Hunting with Dogs

Hunting has been around as long as man has. It is believed that hunting dogs were in use about 20,000 years ago [source Agarwal]. But as man and hunting evolved,­ so did dogs. Nearly 9,000 years ago, man began harvesting livestock and domesticating it. At this time, hunting became less necessary and dogs took on the role of overseeing the animals instead of hunting them. Their strong sense of smell helped them recover stray flock members and discover predators.

As hunting became a sport rather than a life duty, the role of dogs continued to evolve. Hunting dogs were developed to track, point and set game for their masters [source: The Hunting Dog]. By 6,000 years ago, pointers, shepherds, mastiffs, greyhounds and wolf breeds were the prevalent hunting dogs, as they are documented in cave painting as workers hunting with their masters. From these five breeds, man began to look for special traits in dogs and use them for different needs. This is when breeding began and the number of dog species began to grow.

Today, dog hunting is almost entirely for sport, with the exception of subsistence hunts -- isolated Alaskan families, for example, use dogs to help them hunt for food. In the end, the history and evolution of hunting dogs goes hand in hand with the evolution of man.

Today, the number of dog breeds has expanded, but there are still a few select breeds that are regularly chosen for hunting. Check out the next page to see which breeds of dogs make the best hunters.

According to research, dogs possibly date back 135,000 years. Just like humans, dogs had to make their way to the Americas from other lands. How did they do this? It is believed that dogs crossed the Bering Sea to what is now Alaska sometime before 9000 B.C. Looks like the United States has Eastern Asia to thank for its bountiful population of man's best friend [source: Braaf].

Wh­ile any dog could prove successful to a hunt, there are five types that seem most popular among sportsmen.

You've read about the different kinds of dogs, so check out the next page to see what role each dog plays in a hunt.

What's the most popular breed of dog in the United States? Turns out that Labrador Retrievers' gentle, outgoing and friendly personalities make them perfect for both families and hunting. It's estimated that more than 150,000 families have brought this breed into their household [source: So You Wanna Know].

Strategy for Hunting with Dogs

We'v­e gone over the different types of dogs used in hunting, but how exactly does hunting with a dog work?

The following four categories are the most common forms of hunting:

Dogs don't just magically become great hunters -- you have to train them. Check out the next page for tips on training hunting dogs.

Few animal species are better understood than dogs. Through research, scientists have been able to pinpoint amazing details about how dogs became the species we love today. It is almost certain that dogs evolved from the gray wolf -- all dogs, in fact, can probably be traced back to a small pack of female wolves that lived in East Asia [source: Braaf].

Dogs are a rare breed of animal in the sense that they choose to ­serve humans -- they're known for loyal and unconditional affection for humans, which most other animals don't have. This instinct to do what we tell them to makes dogs some of the easiest animals to train.

Here are some on the most common training methods for hunting dogs:

Keep in mind that any of these methods can be combined to achieve specific results. And the manner in which you train your dog is important, too. You should always be flexible, consistent, fair and positive [source: The Hunting Dog]. These qualities will help the dog succeed.

You're well versed in the methods of training a dog, so now read on to discover why some believe dogs are a great addition to hunting while others do not.

We all know the saying, "You can't teach an old dog new tricks." But is that really true? Probably not. Dogs' brains are not as complex as the human brain, but they work similarly. Dogs can learn new tricks after they've passed puppyhood -- it just may take more practice. At a young age, they can pick up multiple tricks quickly, just as children learns the most in their first five years of life. Hey, if that 60-something can master Facebook, you shouldn't give up on teaching your 8-year-old dog to roll over.

Arguments in Favor of Hunting with Dogs

The debate over the morality of using dogs for hunting doesn't come up as often a­s other issues surrounding hunting, but that doesn't mean there aren't strong arguments for both sides. Supporters view the method as morally sound and believe it should be their right to use dogs.

The most common argument in favor of hunting is population control. Hunting with dogs can help a hunter successfully bag an overpopulated animal. If successful population control is the overall goal, what does it matter how the animals are hunted? Shouldn't hunters use the most successful method available?

Dogs track animals more easily than humans do. They bring the prey into close range, giving the hunter a clear shot. Most hunters believe the kill should be quick and clean, and getting a clear shot helps them hit the prey in the specific target area to achieve a more humane death.

Dogs are exposed to the elements when they participate in hunting, but a good owner can watch over a canine companion, keeping close watch over any changes in behavior or indications of harm.

So what does the other side have to say? Go to the next page to learn why some people disapprove of bringing dogs out on the hunt.

Limber Tail Syndrome, or "Cold Water Tail," is a common ailment among hunting dogs. While its cause hasn't been nailed down, it's believed that it's the result of hard workouts like heavy hunting, or being submerged in water that's uncomfortably hot or cold. You can see when a dog is suffering by paying attention to its tail. Normally, the first three or four inches of a dog's tail (seven to 10 cm) should stick up from the body before it droops. A dog with Limber Tail will have its tail clamped down against its body directly from the base. This ailment clears up on its own in about two weeks [source:Woodhaven Labs].

Arguments Against Hunting with Dogs

Huntin­g is controversial to begin with, but when you add in other factors, like hunting with dogs, the already complex debate gets harder to dissect.

Those who oppose hunting with dogs say their stance is twofold. Not only do the techniques often result in dogs maliciously and cruelly maiming the hunted game, but the dogs themselves are said to face hardship. Hundreds of dogs are abandoned each year after they've passed an acceptable hunting age [source: The Hunting Dog].

Even when with their owners, hunting dogs might not be safe. Some prey is willing to fight back. Bears are formidable foes, as they outweigh dogs by a considerable amount. When a bear is on his game, a dog probably won't stand a chance.

Hunting dogs are also susceptible to many illnesses when they spend as much time in the woods as these dogs do. Health hazards include heatstroke, overexertion, ticks, Lyme disease, foxtail infection, poison ivy, snakebites, tongue injuries, Limber Tail Syndrome, exercise-induced collapse, bloating and hypoglycemia [source: The Hunting Dog].

And there's always the ever-popular ethical hunting concept. Does hunting with dogs give the hunter an unfair advantage? The opposition believes so -- without dogs, hunters might have a harder time tracking down their game or leading the prey into a clear shot.

Other countries (like Britain, where hounds are often used in controversial fox hunts) have already taken steps to outlaw hunting with dogs. The debate is not as prevalent here in the United States, but perhaps time will bring this issue into mainstream focus.

Go to the next page for more information on hunting with dogs.

There Are How Many Dog Breeds?

Dogs have come a long way since they evolved from the East Asian gray wolf. Today, there are more than 400 breeds of dog worldwide [source: The Breed of Dogs].