Browse the article How do you mask your scent while you hunt? 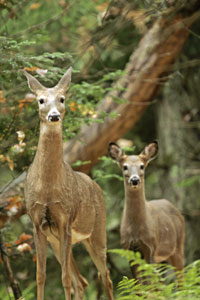 If you haven't disguised your scent, these whitetailed deer will smell you coming.
Jeffrey Phelps/Getty Images

The American whitetail deer has one of the most tale­nted noses in nature. It's estimated that a deer's sense of smell is 100 times greater than a human's [source: Buck Stop]. A mature buck relies on windborne odors to sense the presence of an available female, a male interloper and, most importantly, to alert him to the threat of danger.

Experienced hunters are taught to pay close attention to direction and force of the wind during a hunt. If a human is within range to harm them, they expect to smell a strong human odor. If an animal only smells a scant trace of human odor, then it assumes that the predator is too far away to be a threat [source: Ross and Adams].

­A successful hunter will do everything possible to hide his presence from prey, but all the camouflage in the world won't cover up your distinctive smell. The first step is to understand the behavior of wind and air currents and use them to your advantage. The second step is to mask as much of your human odor as possible through scent-killing soaps, cover scents and even attractants or lures.

Keep reading to find out what you can do both before and during the hunt to mask your smell from the sharp nose of your prey. 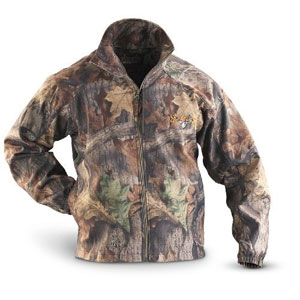 Long before you step out into the woods, ­there's a lot you can do to prepare for a scent-fre­e hunt. The chief sources of human odor are your body and your clothes. Luckily for hunters, there are plenty of products specially designed to neutralize human odor on their clothes and boots.

It all starts with the laundry. Several companies sell laundry detergents that are designed for scent-free hunting. Not only do they remove odors from dirty clothing, but the detergent itself is perfume and scent-free. Wash all of your hunting clothes -- from your socks to your camo -- in such a detergent, and throw an odorless or scent-killing dryer sheet in the dryer. As an alternative, you can hang your laundry out to dry.

If you use the dryer, when your clothes are dry, you should put them directly into a sealable plastic bag. Don't open the bag until you have arrived at your hunting site. If you put on your hunting gear first thing in the morning, then you'll show up at the woods trailing the smells of breakfast, the gas station and the car ride.

The next stop is to deodorize your body. On the morning of the hunt, you should wash with odor-free soaps and shampoos. Once again, several companies sell perfume-free, scent-killing body washes that leave you clean and give off a neutral odor. Instead of using a strong-smelling deodorant to mask the smell of your sweat, opt for a scent-free antiperspirant.

After breakfast, brush your teeth with baking soda. Although it's not as minty fresh as your regular toothpaste, baking soda is a proven odor-killer.

If you're really serious about masking your scent while hunting, you might consider buying special hunting clothing that locks in human scent. Scent-Lok is one company that makes scent-proof hunting apparel. The clothing is lined with a layer of fabric composed of tightly fused particles of charcoal. According to the company, when human odor molecules like isovaleric acid (sweaty smell) and dimethyl sulfide (breath odor) try to pass through the activated carbon lining, they bond with the particles of charcoal. Everything else -- air, moisture and heat -- is allowed to pass through the lining, keeping the clothing breathable. After about 40 hours of use, the activated carbon lining becomes saturated with odor molecules and needs to be reactivated by a quick spin in a hot dryer [source: Scent-Lok].

Now that you've neutralized all of the odors on your body and clothing, it's time for some tips on how to mask your telltale smell during the actual hunt. 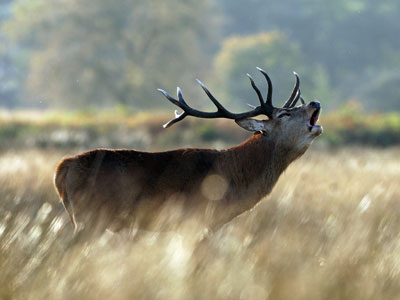 Hunting­ companies sell all kinds of natural and artificial masking scent, cover spray and attractant for use during a hunt. You can choose from natural cover sprays like pine, acorn, apple and earth or even scents designed to smell like raccoon, fox or skunk urine.

To effectively mask your scent during the hunt, you need to know a few things about the environment in which you're hunting. Before the invention of synthetic mask scents and cover sprays, hunters used to simply rub their hunting clothing with local flora -- pine needles, mashed acorns or even dirt. The logic is easy to follow: If you're trying to mask your scent in a forest, try to smell like a native species instead of a foreign invader [source: Norman].

That same logic applies when using artificial masking and cover scents. There's no point in spraying yourself with pine-scented cover spray if you're hunting in a deciduous forest. And all the raccoon urine in the world won't trick a buck who has never met a raccoon before.

A good place to start with odor-masking scents is a scent-killing spray that you spray on your clothes and boots. From there you can decide if you want to use an additional cover scent that matches your hunting environment, like cedar, sage or red fox urine.

Attractants take scent masking a step further. These are odors that are meant to not only cover human odors, but lure prey by capitalizing on their mating instincts. Every fall, for example, whitetail deer enter what's called the rut, a series of mating rituals. During the rut, not only are bucks searching for does in heat, but they are trying to defend their territories from male competition.

Deer hunting attractants try to lure in bucks by replicating the smells of does in heat or of testosterone-pumped males. The scents can be applied around buck scrapes, areas where active bucks have left their scent on a tree, or near a deer hunting tree stand to lure in prey.

For multi-day hunts, it's important to try to limit the amount of human and foreign odors on your clothing. Portable showers are a great way to stay clean and odor-free on an extended hunt. If showers are too bulky, you can buy disposable odor-killing wipes [source: Ross]. The important thing is to minimize the smells of sweat, food and campfire smoke on your person.

For more information on deer hunting and related topics, hunt through the links on the next page.