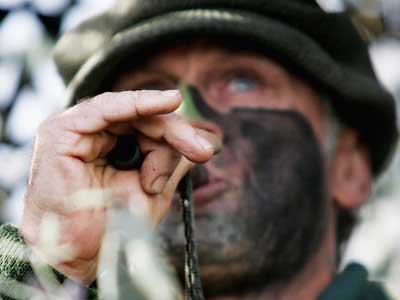 What are the most popular hunting calls? The sound of a female loo­king to mate and the sound of a young animal in distress. Most hunters recommend simply listening to the sounds you want to mimic -- either on CD or online. Once you're familiar with the sound, it's easier to figure out how to copy it.

A variety of calls will attract deer. Most deer calls are mouth blown calls, and they mimic the sound of deer and fawn bleats or the grunts of bucks. You might be wondering why a hunter would want to call a fawn when he or she is trying to attract a buck. It's because a buck knows that the sound of a fawn will attract a doe. He'll show up to check things out, hoping to hook up with a mate.

Deer mouth calls consist of a mouthpiece at one end (either plastic or wood) attached to a flexible plastic tube (like an accordion), and an internal reed diaphragm. These calls mimic the grunting sounds bucks make when pursuing does. They're sometimes called grunt tubes. Adjusting the length and shape of the flexible tube will produce different sounds. Some grunt tubes come with an attachment that also makes bleat sounds.

There's even a bleat can available for deer calls. Simply tip the can upside down and then tilt it upright again to make this call. The sounds mimic the noise does make when they're looking for mates or the bleat of young does calling to their mothers.

Some hunters will rattle old antlers together to simulate the sound of a fight, which attracts curious bucks. Rattling is most effective during the beginning and the end of the rut, or mating season, when bucks are feeling particularly competitive.

­Many people enjoy hunting moose and elk. Obviously, you need a big sound to attract such a big animal. You can use anything from a strip of bark­ rolled up like a megaphone to a mechanical call to attract these animals. The mechanical call looks a lot like a deer call, but with a trumpet shape at the end that amplifies the sound.

Hunters even learn to mimic the calls of predators. Predator hunting took off in the 1970s, when the pelts of these animals became valuable on the market -- some pelts, like bobcat, would go for over $300 [source: Spomer]. Today, with fur demand down a bit, hunters search out predators mostly for population control. And some people use these calls simply for the thrill of getting close to a predator -- and they don't actually kill the animal.

The hunting calls for predators simulate the sound of a prey animal in distress. Predator animals are hard-wired to go after injured prey -- it makes their jobs easier. Hunters can purchase calls that mimic the sound of coyote puppies in distress or the cry of rodents like squirrels, mice and rabbits.

There's more to learn about hunting and fishing, so visit the links below.