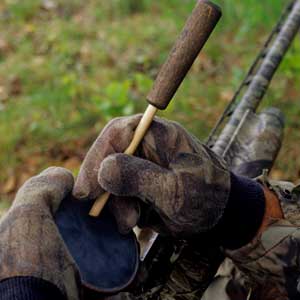 It's not hard to figure out that certain calls attract c­ertain animals. But you can't just mutter "gobble gobble" and expect a turkey to stroll out of the brush. There are different calls for different scenarios, and the challenge is learning when to use which. Most sportsmen consider mastering the different types of calls part of the art of hunting, which is why there's no one-size-fits-all type of call. Sometimes a hunter wants to draw game closer. Sometimes he or she wants to spook a bird out of its hiding place. Let's check out some common game birds and the sounds you can use to attract them -- whether you're making the sound yourself or using a mechanical device or electronic box.

There are dozens of different calls for turkey hunting. Wild turkeys are notoriously fickle, and will answer -- or not answer -- to a variety of calls. Here are a few and what they mean:

A cluck is a friendly call and gets the turkey's attention. You can cluck with a diaphragm call by popping air across the reed -- say the word "puck" or "putt" to produce the sound. Use a box call to make a cluck by popping the handle lightly on the sound lip. A push-pull call will emulate a cluck if you tap the pin against the palm of your hand or your leg.

Cutting is the sound made by a female turkey (hen) looking for a companion. Using a diaphragm call, string together several sharp and fast clucks. Cuts are a staccato sound. Box calls are good for cuts. Put a bit of pressure on the handle and then tap a series of fast and sharp clucks. Same with a push-pull call -- just make clucks but short, fast and sharp.

Turkeys call out to each other by yelping. A yelp is a multipurpose call and is a valuable one to learn. To yelp using a diaphragm call, you need to slur two notes together, one high and one low. Experts advise saying the word "chalk" while moving your jaw up and down. A box call will yelp if you move the handle a bit off to the side of the box and then close it, which will run two notes together. Varied pressure makes the calls high or low. With a push-pull call, pull longer strokes than you would with a cluck.

Content and happy turkeys purr. Use your diaphragm call to purr by pushing up air from your chest and fluttering your tongue. This one is tough for many hunters to master. Make your box call purr by just dragging the lid slowly and softly across the lip of the box. A push-pull box will purr if you use softer strokes when pushing in the pin.

Duck and goose hunting also requires the mastery of several kinds of calls. Most hunters use hand calls to attract geese and duck. The quack is, of course, the most basic call to grab attention. Make a clean and crisp quack sound into your call. A greeting call will bid "hello" to a group of distant ducks -- it's a series of five to seven notes in descending order. The feed call announces that food is nearby. Experts advise saying "tikkitukkatikka" into the call. To attract ducks or geese from long distances, you can use a hail call. This call is fast, hard and very loud. A lonesome hen call is the sound a female makes when she's looking for a companion. It's drawn-out, irregular and nasal "quaaaacks." Whistling is another way to call out to other ducks or geese. You just need to listen to the natural calls to mimic them with your own whistle.