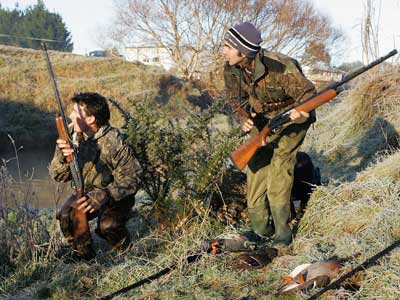 The hunter on the left is using his call to lure ducks into shooting range.
Sandra Mu/Getty Images

Hunting calls are a lot like musical instrum­ents -- they require serious practice to master. There are dozens of different types of hunting calls. Many calls are mass-produced; others are artistically handcrafted. Some calls work when air is blown through them. Others are electronic and work at the push of a button. And some hunters don't use mechanical calls at all -- they instead whistle or click with their own mouths. Let's investigate some of the more popular hunting call devices.

First up are hand calls. You hold these devices to your mouth and either suck air in or out to produce a sound. These calls have five basic parts:

Those pieces work together to produce sound when you blow into the mouthpiece of the call. You hold the barrel to your mouth and put your hand at the other end of the device to regulate the sound coming out. The reed, tone board and wedge are collectively called the insert, and hunters often refer to this as the call's guts. Machines or artisans cut reeds in different shapes to lend the call different sound properties, and they can be made of bamboo, wood or even metal -- although metal reeds tend to freeze in cold temperatures. Calls can be made of plastic, or turned by hand on a lathe, a machine used to shape wood. Many hand calls are double-ended, with a whistle on one end. Hand calls are typically used for waterfowl, turkey, deer or coyotes.

A box call makes sounds when its pieces are rubbed together. Usually made of wood like cedar or walnut, a box call is a rectangular, hollow box with slightly arched sides that serve as sounding boards. A lid, also called a paddle, is attached to the top by a hinge screw, so it can move back and forth, and attached to that is a handle. To produce clucks, yelps, gobbles and other sounds, you scrape the paddle against the sides of the box. The quality of the sound depends on the shape of the box's sides. Push-pull calls, recommended for beginners, work similarly, except instead of scraping the paddle, you push and pull a plunger to produce sound. Turkeys are the primary target for box calls.

The diaphragm call, also a hand call, comes in two types -- exterior and interior. An exterior diaphragm call is a thin piece of latex stretched over a plastic tube. You hold the latex-end of the call up against your mouth and blow. If you stretch the latex with your mouth in different ways as you blow, you can produce different sounds.

An interior diaphragm call actually goes inside your mouth, so you don't need to use your hands at all. The diaphragm fits on the roof of your mouth, with the reeds facing forward. You blow deeply through the mouthpiece, working your jaw up and down to make different sounds. Diaphragm calls typically attract turkey, hens or elk. Speaking of elk, many hunters use a bugle to attract them. Elk bugles are diaphragm calls, but with a tube added to the end that amplifies the sound.

Electronic calls store different sounds on a computer chip, and work at the push of a button. A champion caller usually records the sounds in a professional studio. Several states prohibit the use of electronic calls, so you should check with your local game officials. Some people argue that using electronic calls is an unfair hunting practice.