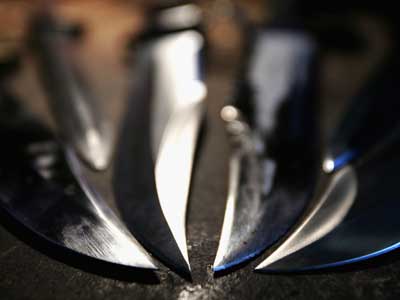 ­Choose a hunting knife based on what type of game you hunt and how often you trek out.
Getty Images

A quality huntin­g knife is versatile enough to do everything the average hunter needs -- from skinning the animal to splitting through its ribcage and bone. When you're choosing a hunting knife, it's important to consider how you'll use it and the type of game y­ou plan to hunt. Clearly, the big game hunter will use a different type of knife than someone who hunts rabbits. And, if you think bigger is always better, you'd be wrong. An oversized knife will make cleaning small game harder, not easier, and increase your chances of cutting yourself.

Once you've determined what size knife you want, consider how often you hunt. If you only hunt occasionally and you want a knife that can be used for a variety of purposes, you may want a smaller folding blade knife. If you're a dedicated hunter and plan on using your knife only for hunting, a solidly-built fixed blade knife may make more sense.

­Next, you've got to decide whether you want to carry your knife in a sheath or keep it in your pocket. It's obviously not a good idea to carry a large fixed blade knife in your pocket -- unless you want to slice open your leg. And, as always, your budget is an important consideration as well. Hunting knives are available in a wide variety of prices, and you want to get the best knife possible for your money. Fortunately, no matter what type of knife you choose, it'll be capable of handling most hunting duties. The only reason you may require a second knife is if you're interested in a trophy mount. If so, you may consider also investing in a capping knife, but we'll talk more about those later. 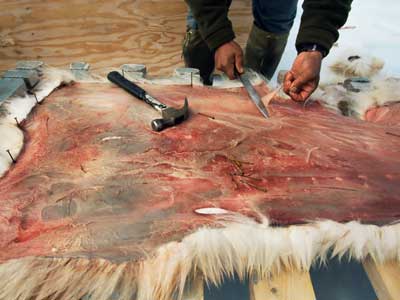 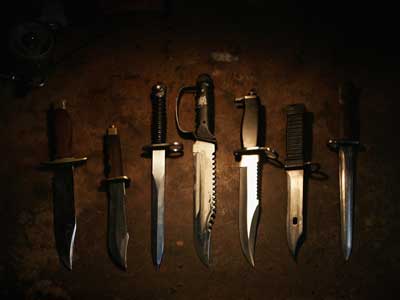 Hunting knives come in all shapes and sizes. Take your pick.
Getty Images

Once you've made ­the choice between fixed and folding, it's time to choose your blade. There are several types of blades available, and the choice boils down to personal preference and the type of game you typically hunt. There are three common types of blades -- clip point, drop point and skinning blade.

The clip point knife blade is thin with a well-defined point. The blade itself is relatively flat. This knife is versatile enough to be used for general camp chores and specialized hunting jobs, including field dressing and skinning. The hunter who wants a good all-around knife should consider the clip point blade.

The drop point knife is a specialized hunting knife. It's used to dress the animal and skin it, but shouldn't be used to cut rope or twigs, or do other general camping-related chores. The blade of a drop point knife is thick and curved. The point is not defined, which makes it easy to use the entire blade for skinning. Using the entire blade not only speeds up the process, but reduces the risk of damaging the meat. Because it doesn't have a distinct point, you're less likely to tear into the meat while you're skinning the animal. The blade's robust design allows the hunter to use the knife for gutting and other field cleaning duties.

­Skinning blades are designed to skin big game animals. The blade quickly and neatly separates the skin from the meat of large game. Although the blade is specifically made for skinning, the knife can also be used for other hunting chores.

Once you've decided among the clip point, drop point and skinning blades, you should consider whether you want the blade to have serrations. Serrations allow you to use the blade for heavy jobs, such as splitting through a rib cage, and typically take up only a small portion of the blade's length.

Regardless of the type of hunting blade you choose, your knife may come with a gut hook. The gut hook is very helpful when it's time to field dress your kill. The hunter makes a small incision in the abdominal cavity with the hunting knife, then inserts the gut hook and pulls to slice open the abdomen. The gut hook prevents the hunter from accidentally puncturing an internal organ, which can affect the quality of the meat. If your blade doesn't come with a gut hook, you can purchase gut hooks separately.

The Best Hunting Knife -- How to Recognize Good Quality 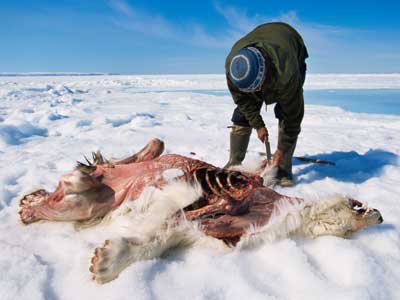 ­If you're interested in a folding blade knife, examine the pivot point thoroughly. This is the area that will be under pressure as you open and shut the blade. Also, check the locking mechanism -- if this fails, it can cause a nasty accident. A quality blade, a sturdy handle and a strong intersection of the two are all important points in both a folding and fixed blade knife.

Hunting knives are available in a wide variety of prices. How much you pay will depend on what you're looking for. A stainless steel blade is typically more expensive than a carbon steel blade. A finely detailed bone handle is more expensive than a rougher wooden handle. It makes sense to invest first in a quality blade. If you can afford a nicer handle after that, go for it. A cheap, lightweight blade will be a discouragement from the get-go. It won't hold an edge as well, and the area where the blade joins the handle may not be strong. With proper care, a quality hunting knife should last for years. So consider it an investment. 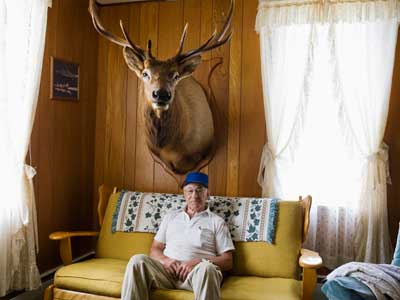 If you'd like to turn your kill into a trophy mount, you'll need a capping knife.
Simon Willms/Getty Images

­Proper care will extend the life of your hunting knife. You'll normally store your fixed blade knife in a sheath, but if you don't plan on using it for a while, you'll need special long-term storage solutions. For long-term storage, wrap your clean and dry knife in plain paper, and store that package in a plastic bag. Add a package of desiccant to the bag to absorb any moisture.

It's also important to keep your knife sharp. A sharp blade cuts easily, which will prevent you from accidentally cutting yourself by trying to force a dull blade. You can have your knife blade professionally sharpened, but it's actually an easy project to complete yourself. Just get a knowledgeable person to show you how to sharpen your hunting knife for the first time, and you'll be able to do it yourself after that. It's important to learn how to do it from an expert because the wrong technique can actually dull your hunting blade.

­Day-to-day care is the best way to extend the life of your hunting knife. Clean the blade and handle thoroughly after use, using a product made specifically for the job. A quick wipe down in the field is a good idea after you use your knife, but it doesn't replace a thorough cleaning when you arrive home. Use a product made specifically for your knife's material. There are many multifunction cleaners that can be used on metal, wood and leather. These products make it easier to clean your knife because you don't have to worry about ruining your handle when you clean your blade.

Often these commercial cleaners also work as a lubricant and protector. Using all-in-one products can save a great deal of time for you in caring for your knife. Proper care of your hunting knife will extend its life and reduce your risk of accidentally cutting yourself. A sharp blade that's securely set in the handle is the safest blade to use.

Many people get by with only one hunting knife. This is possible if you're hunting only for meat. If, however, you're looking for a trophy, you'll want to invest in a capping knife. A capping knife has a fine blade and is made for more detailed work. A capping knife allows you to quickly and neatly cut through the skin around the shoulders of the animal, preserving the hide for a trophy mount.