Wild Boars and the Fair Chase of Knife Hunting 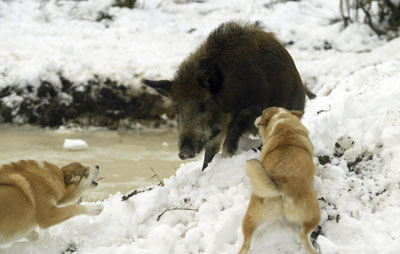 Wild boar are found (and hunted) throughout the world. This boar is cornered by two hunting dogs at a kennel in Belarus.
Alexey Gromov/AFP/Getty Images

When it comes to hunting and the concept of fair chase, some methods lie on opposite ends of the spectrum. Take Internet hunting and knife hunting.

Internet hunting first appeared in 2005 when an outfit in Texas began offering the service of hunting remotely. For a fee, hunters can log on to a private Web site, train his or her sights on an animal led into view of a webcam, and click a mouse that remotely fires an on-site rifle, killing the animal [source: HSUS]. Apparently the perception of Internet hunting as unfair overtook any benefits it offered disabled hunters, for whom it was oft touted [source: UDWR]. It was banned by the Texas legislature six months after the service first appeared. By April 2008, 38 states outlawed Internet hunting and Congress was working on a federal ban [source: HSUS].

You won't likely see any bans on knife hunting based on questions of fairness. Using only a knife can be a particularly dangerous way to hunt. It's generally used in expeditions for wild boar, a non-native species imported to the U.S. in the 16th century for use as livestock. Once enough members of the domesticated species escaped and reproduced in the wild, the boars became feral pigs.

Since feral pigs eat crops, the United States federal government considers them an invasive species [source: USDA]. They're generally tranquil toward humans, but those centuries spent freely roaming the hills and forests of the United States have made them wary of people. Adult males can grow as long as six feet (1.82 m), and weigh more than 750 pounds (340 k) [source: University of Michigan]. Both males and females of the species have two constantly growing (and sharp) pairs of tusks protruding from their jaws. When a frightened boar comes at a hunter who's holding nothing but a knife, you've got a quarry that can tip the balance of fair chase in its own favor.

Knife hunters often use dogs to flush boars from their hiding places low in a cover of brush. Since boars aren't very tall, once one emerges suddenly from a cover of vegetation after being flushed out, it can take a hunter by surprise. With the knife ready, the technique for killing a boar with only a blade involves taking it head-on as it runs toward the hunter. Once the boar is within reach, the hunter pushes it down to the ground and stabs it to death [Florida Guide Service]. Other hunting outfits use dogs to subdue the boar while the hunter stabs it [source: Monteria Boar Hunts].

Even trained hunting dogs aren't guaranteed an easy time at attacking boars. Sports author Harry McEvoy wrote about a 1976 knife hunt for boar in Florida undertaken by hunter Tony Cascarella. A 275-pound (124 k) boar killed two of Cascarella's hunting dogs and maimed a third when it emerged from the brush. It was headed toward Cascarella, who added a degree more danger to knife hunting by using throwing knives. Cascarella threw three knives at the boar. He found his target each time, killing the boar and setting a record [source: McEvoy].

So is knife hunting the fairest way to hunt? This up-close-and-personal method certainly seems fairer than shooting an animal from a distance or over the Internet. Of course, one could argue that the only truly fair way to hunt it to use no technology at all. Taking down an animal with one's bare hands sounds fairest, especially if that animal can fight back.

For more information on hunting and other related topics, visit the next page.