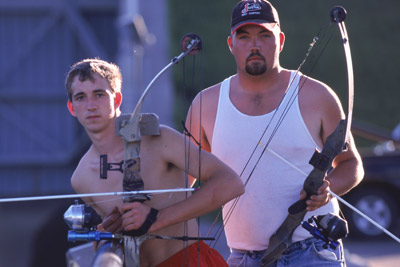 These two are about to start bowfishing for carp with their compound bows and arrows at the base of the Gavin Point Dam on the Missouri River.
Jose Azel/Aurora/Getty Images

How do archers or bow hunters extend the hunting season? How might they improve their archery skills? Take to the water! The technique of hunting fish with a bow and arrow is called bowfishing or archery fishing. Bowfishing combines the thrill of hunting with the skill of archery and the sport of fishing.

Although the term "bowfishing" may be new to you, the idea of hunting fish with bows and arrows probably isn't. Humans have hunted fish like this for centuries. For example, Indians in the Amazon River basin have used bowfishing as a means of gathering food for generations and still do today.

On the surface, bowfishing appears similar to spearfishing. Both techniques use pointed objects to catch fish rather than baiting them with a hook. In addition, you can practice both methods standing in shallow water or in a boat. Bowfishing, however, uses its namesake bow to propel the arrow. Spearfishing relies on nothing but your hand to propel the spear. Skilled spearfishermen can als­o hunt underwater, using a speargun for propulsion and some sort of diving gear, such as snorkels or scuba.

How do you get started bowfishing? Will any old bow do? And what can you catch with an expertly aimed arrow? We'll tell you all that as we explore the sport of bowfishing.

Next up: Find out what gear will help catch your gar.