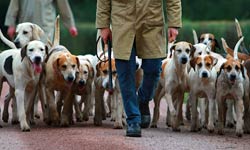 Hounds are exercised in preparation for the start of the new hunting season in Knutsford, Cheshire, England.
Christopher Furlong/Getty Images

Not only are dogs man's best friend, they also make excellent hunting partners. Dogs have been assisting humans in the hunt since ancient times, when the Egyptians used greyhounds to track down gazelles [source: Encyclopedia Britannica]. Since then, scores of canines -- from the uniquely shaped dachshund to the graceful vizsla -- have been bred to sniff out and track down prey so skillfully that going home empty-handed seems impossible.

A hunting dog's desirability depends a lot on the size of the dog, how well it's been trained, the target prey, the type of terrain you'll be hunting and whether you want your best bud to merely point to the target or to bring it back to you. The 10 hunting dogs in this article consistently stand out from the pack.

The dachshund is the rare breed that, because of its small size, is good for both hunting and urban living. Standing 5 to 9 inches (13 to 23 centimeters) in height and weighing anywhere from about 16 to 30 or so pounds (7 to 14 kilograms), these long low dogs use their powerful legs to track down a variety of smaller game. The breed can be traced back to 17th-century Europe where dachshunds were used for hunting small game like badger -- dachs is the German word for badger -- fox and rabbit [sources: Iams, Dog Breed Info Center].

There are three varieties of dachshund: smooth, wirehaired and longhaired. In addition to their size and strength, these canines often display certain valuable terrier characteristics (courage and tenacity, in particular). While many owners buy dachshunds as companion dogs these days, the breed's size and fearless nature also make them an asset in the field [sources: AKC, Iams, Dog Breed Info Center]. 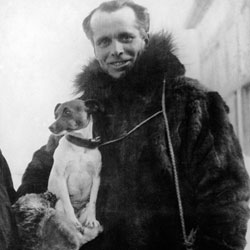 In this photo from 1928, Italian solider and explorer Umberto Nobile holds his pet fox terrier and mascot Titina, who accompanied him on both his flights over the North Pole.
Pictorial Parade/Getty Images

These lively but small dogs -- 12 to 15 inches (30 to 38 centimeters), 15 to 19 pounds (7 to 9 kilograms) -- are more difficult to find than many of the popular hunting breeds, but their short, powerful frames suit them for fox hunting [source: Iams]. A muscular canine with a thick neck and strong back, the fox terrier originated in 17th-century England and was bred to chase foxes out of their dens and other hiding places. Their small bodies allow them to get into cramped spaces, and their long legs allow them to keep pace with fox hounds.

In 1984, the American Kennel Club distinguished two breeds of fox terrier: smooth and wirehaired. The most notable difference between the two breads is the coat. The wirehaired fox terrier is named for its wiry coat of dense and twisted hairs [source: Dog Breed Info Center].

Some researchers believe that this dog is the genetic base for a number of hunting breeds, including spaniels and the Portuguese water dog. Highly intelligent, agile and easy to train, the Spanish water dog is a medium-sized canine that's well equipped for flushing and retrieving water fowl and game. Its dense wool, however, makes the breed better suited for water activities than hunting in the brush, where it's much more likely to get tangled [source: Dog Breed Info Center].

Spanish water dogs have been employed as sheep and goat herders in Spain's Andalucía region for centuries. One of many theories of the breed's origin is that Turkish merchants brought the dog to southern Spain to herd livestock as they moved throughout the Mediterranean. Spanish water dogs are also used for search and rescue missions, as well as bomb and narcotics detection. In recent years, they've become popular show dogs [source: Spanish Water Dog Club].

If you're new to bird hunting, there are a few distinctions you should understand before selecting a canine companion. Pointing dogs freeze to indicate the presence of birds in the area. Flushing dogs runs toward a flock of birds to rouse them into the air for shooting; once the bird is shot, retrieving dogs pick up the animal and bring it to the handler [source: Outdoor Site Library]. 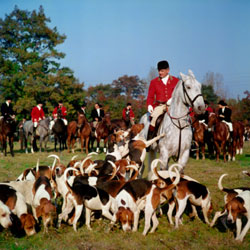 Beagles and their masters prepare for a traditional fox hunt.
Jupiter Images/Getty Images

These small- to medium-sized, sturdy hounds are natural trackers known for letting out a distinct, shrieking howl when on the hunt. It's believed that English beagles originated as across between the harrier and other types of English hounds, bred for tracking (alone, in pairs or in packs) small animals like rabbit, quail and pheasant [source: Iams]. 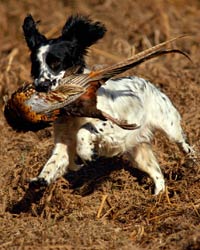 This English springer spaniel's got a gentle grip on a freshly killed pheasant.
David Tipling/Stone/Getty Images

Spaniels may not obviously to come to mind when speaking of hunting dogs, but the English springer spaniel showcases all the desirable qualities for a top hunting breed. Considered gundogs or bird dogs, these medium-sized canines get their name from their talent for flushing, or springing, birds out of hiding for their masters to shoot.

While smaller than typical gundogs -- 40 to 50 pounds (18 to 23 kilograms) and about 20 inches (51 centimeters) tall -- what spaniels lack in size they make up for in spunk. Their strong legs and high energy level make them ideal for long days on the hunt, and their coat, a dense, short undercoat covered by a long top coat, can effectively withstand a variety of weather and climate conditions.

Though they were bred primarily to flush game, the springer spaniel's gentle mouth grip is also well suited for retrieving without inflicting damage. These qualities, combined with an eager-to-please attitude and trainability, make this versatile hunting dog a preferred companion for many outdoor enthusiasts.

The Brittany is a long-legged, medium-sized -- 17 to 20 inches (43 to 51 centimeters) and 30 to 40 pounds (14 to 18 kilograms) -- dog known for its smarts, stamina and willingness to be trained to hunt. Named for the French province in which it is believed to have originated, this popular bird hunting breed has been used for both pointing and retrieving quail, woodcock, pheasant and grouse since 1894 [source: Iams].

These canines are prized for a hearty ability to adapt to conditions on a variety of terrain, such as woods, plains and hills. Curious dogs, they have a tendency to roam but remain popular due to their size, ability and general good nature [source: Iams].

Many hunting breeds are very active by nature and, as a result, should be walked vigorously every day. Yet it isn't just the length and time of these walks that's important. The handler must establish his role as the pack leader, which will help make the dog more attentive and less likely to roam [source: Dog Breed Info Center]. 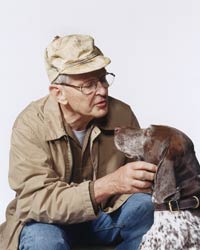 This coonhound is a tracker by nature.
Catherine Ledner/Riser/Getty Images

Nose to the ground and intent on tracking its prey, the coonhound is another dog that makes a hunter's job easier. This breed relies on scent rather than sight to locate prey, hounds generally go after small mammals like raccoons (from which they get their name) or opossums, chasing the animals up trees and barking until their owner arrives. Approximately 2 feet high (0.6 meters)at the shoulder and blessed with plenty of courage, they're also helpful in hunting large game like deer.

Coonhounds likely originated from breeding two excellent trackers (bloodhounds and foxhounds) together, combining a keen sense of smell with increased speed and stamina. The dog's dense coat also allows the coonhound to tolerate a range of weather conditions, equally adaptable to heat and cold. Their courage and loyalty are immortalized in the beloved children's book "Where the Red Fern Grows," and the coonhound's reputation as a warrior of the hunt is so valued that the American Kennel Club's judging regulations advise that "scars from honorable wounds shall not be considered faults" in evaluating the breed for show [source: AKC]. 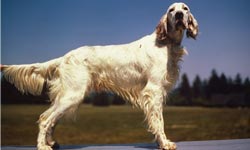 Don't let the pretty exterior of this show dog fool you --- English setters can hunt with the best of them.
Herbert Gehr/Time Life Pictures/Getty Images

English setters, originally trained as elite bird dogs in the United Kingdom, combine the best qualities of spaniels and pointers. After silently tracking down prey with their excellent sense of smell, setters crouch down and wait for the hunter's approach rather than flushing the birds out of hiding.

Like all good hunting dogs, English setters can be trained easily and have lots of energy. Their well-muscled legs carry them quickly and effortlessly across the terrain, and they don't tire easily. Hunting is the perfect way to entertain their enthusiasm and intelligence; without it, the dogs need another comparable outlet such as frequent walks or playtime spent in a large, fenced yard.

The medium-sized English setters, as well as the closely related Gordon and Irish varieties, are always well-represented at a number of hunting field trials. 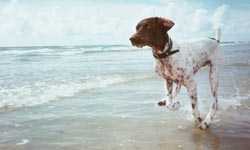 Pointers are equally as good in the water as on the sand.
Shelley Wood/Photonica/Getty Images

Known for their versatility in the field, German shorthaired pointers work equally well on land and in water. While they're best known as bird dogs, they make skilled trackers of land mammals like raccoons, opossum and deer. Highly intelligent, the pointers are also obedient and easy to train.

Ranging in size from 55 to 70 pounds (25 to 32 kilograms)and 23 to 25 inches (58 to 64 centimeters)tall at the shoulder, the pointer's athleticism is apparent as it bounds far ahead of the hunter to locate prey. Considered to have the best scenting ability of all the bird dogs, the German shorthaired pointer is another breed that doesn't flush, but freezes and points -- hence its name -- to tracked prey.

It should come as no surprise that the dog's likely origin comes from crossing some of the best hunting dogs, including the Spanish pointer, German scent hounds and other track and trail dogs. 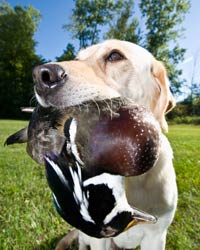 Someone brought you a duck.
Apple Tree House/Lifesize/Getty Images

Like the pointer, the aptly named Labrador retriever is a well-rounded hunting companion. Perhaps Labradors are best known as water dogs because of their moisture-repellent coats and weblike feet that propel them easily through water to fetch prey. Retrievers are also equipped with a high level of intelligence and good temperament, which make them ideal for training. These qualities serve as part of the reason that Labradors, as well as golden retrievers, are consistently ranked as the most popular breeds in the United States [source: AKC].

Like spaniels, retrievers' mouths also have a gentle grip that lets them retrieve prey without damaging it. Their willingness to please lends them well to tasks other than retrieving. Labradors also make good trackers and pointers, and they quickly adapt to a wide range of environments.

With a sturdy build and weighing about 55 to 75 pounds (25 to 34 kilograms), Labradors are true utilitarian dogs, equally at ease gathering quail as they are fetching fallen ducks from an icy pond. Their well-roundedness makes them quality hunting dogs in any season. 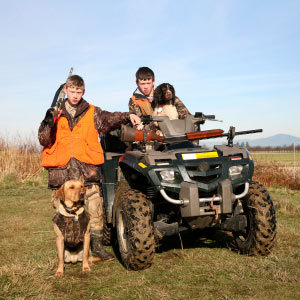 Hunting ATVs allow hunters to get to areas that would normally be unreachable. Learn all about hunting ATVs at HowStuffWorks.