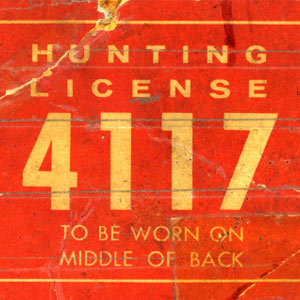 An antique hunting license from the 1930s.
iStockphoto/Denise Roup

You've waited for this day all year long. Yo­u've cleaned your gun and spent countless hours reminiscing about last season with your hunting buddies. This year's going to be the year, you're sure of it -- but that's all out the window if you forget to buy your hunting license.

The most common argument hunters use to justify their controversial sport is the role hunting can play in conservation. They say that because many animal species are becoming overpopulated, the animals and their ecosystems are overstressed. There isn't enough room or natural resources to accommodate all the living beings. Because of this, animals are in tougher competition, and the high populations are draining Mother Nature's resources. Hunters, they say, can alleviate some of this pressure by reducing the populations of certain species so that the numbers are manageable again and the competition will decrease.

For this to work, however, there have to be regulations on hunters. If there were no limits on how many of a specific species could be harvested in a year, an entire species could be wiped out by overzealous hunters who have been waiting all year to get out their guns. This is where hunting licenses come in.

­Each state divides its hunted species into categories and sets limits on how many can be harvested per hunting season. They assign licenses to these categories and sell them for a wide range of prices to waiting hunters. Once the licenses for a certain species are sold out, the hunters who were unable to purchase them have to wait until the next appropriate season. Hunting without a license is considered poaching.

Want to make sure you make it through your hunting trip without a hefty fine or jail time? First, be sure you're properly licensed to hunt. Read ahead to learn more about the different kinds of licenses that are out there.

Depending on the specific state or are­a you'd like to hunt in, you'll need to check with the local Department of Conservation or Natural Resources to see which types of licenses are available. They should be able to help clarify or direct you to an appropriate contact.

While licenses depend greatly on the local species, here are some common license categories:

­Within those categories there are different types of licenses. Most states offer licenses to their residents for a discounted price and to nonresidents at full price. Veterans, senior citizens, childr­en and people with disabilities can often get discounted or free licenses as well.

It is crucial to check with your local license vendor about the specifics -- this information changes from state to state. Some states have only a few options that are easy to sort out, but then there are states such as Michigan, which has nearly 150 different hunting licenses [source: Michigan Department of Natural Resources].

So you've done your homework and figured out what license you need to buy. Click to the next page and you'll read about applying for that license.

For many students in northern Michigan, Nov. 15 is a holiday. This day marks the start of open season for deer hunting. Foreseeing poor attendance, many public schools shut their doors, giving the students the day off. Somewhere along the way, Nov. 15 was deemed "Deer Day" throughout the area.

The ap­plication process for hunting licenses varies from state to state. Generally, it involves the hunter visiting the Department of Conservation or Natural Resources, or locating a license agent. These days, many states have online applications that speed up the process. Your local conservation group's Web site is your best bet for finding the necessary information.

­When you go to apply for a license, be sure to bring a driver's license or photo ID with you. Some states might even require that you complete a hunter's safety course at least once in your lifetime before they'll approve your application. Courses are offered at a variety of times and are usually inexpensive.

Once you're sure you've located the appropriate license and fulfilled all the requirements, you should be all set. Now that you've got the right license, visit the links on the next page to learn more about hunting.

The Laws of Nature

Don't underestimate the importance of securing a proper hunting license. As mentioned before, hunting without a license, or ignoring the regulations on your license, is illegal. If you harvest an animal under these circumstances, it is considered poaching and can results in serious fines. In Alabama, the minimum poaching fine was recently increased from $250 to $1,000. Multiple offenses lead to larger fines and the possibility of jail time [source: Times Daily].