by Rosalind Jackson
NEXT PAGE 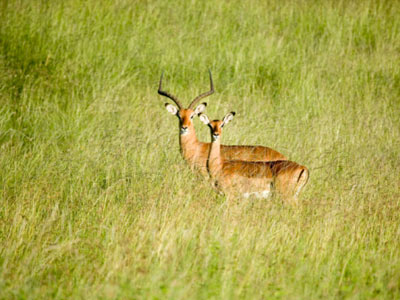 Remember the days when you used to sing these son­g lyrics, "Oh give me a home where the buffalo roam, where the deer and the antelope play"? As you sang, you pictured large preserves of forests and fields full of wildlife. Maybe you were the kind of kid who knew someday you would be old enough to appreciate the beauty of nature while taking part in the pursuit of that wildlife. The thing is, as several years have passed, you realize the extent of the issue of scarce land. More and more, the country has ever-sprawling suburbs that are cutting into those natural preserves of land where animals make their home. Hunters, big game enthusiasts and admirers of the natural world are directly affected by this ever-shrinking scenery.

Numerous factors have and are continuing to interfere with natural hunting habitats. Some of those factors include city sprawl and construction. Commerce often necessitates the building of roads or harvesting natural resources, such as logs and water. These events, along with some vocal animal rights groups, have affected the places where hunters are able to hunt.

Thanks to Francis Parkman's personal journal, we have a first-hand account from the 19th century of buffalo hunting. Certain members of the Native American village Parkman observed would choose one of two methods of hunting and catching the buffalo they sought. One method, called "running," involved the gun-toting hunter charging into a pack of buffalo while on horseback. "Approaching" was the second technique, where a hunter would confront its prize on foot [source: Eye Witness to History].

Click to the next page to read about ways to conserve hunting habitats.