How to Transport Harvested Game

Browse the article How to Transport Harvested Game 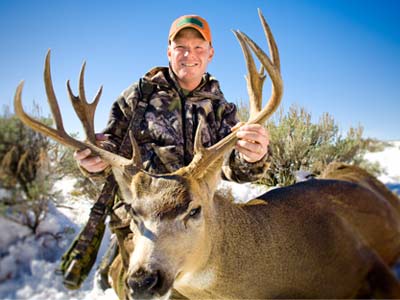 This hunter has bagged a buck, but now he has to be careful about how he transports it out of the woods.
Tyler Stableford/Taxi/Getty Images

One of the best parts of hunting is bringing your harvest home, either for the dinner table or as a new mount for the living room wall. But the journey from the woods to the wall can be long and hard, and there are things you need to know before you begin.

First, not only will you need a license to hunt, but also a transportation permit. Every animal you bag will need to be tagged with a transportation permit before you take it to the check-in station. Once you have checked it in, you can head back into the woods (if more than one animal can be bagged in a single day) or head on to the meat processors.

Second, there are serious safety concerns with transporting harvested game. There are personal safety issues with moving the game from the woods to your vehicle and also very serious concerns regarding the spread of disease and moving to, from and through containment areas. This article will take an in-depth look a­t these kind­s of safety concerns.

­Once your harvest is loaded in your vehicle, how you transport it to the check-in station and to your home or the processors is a sensitive matter that has the attention of lawmakers and the public in general. You should always remember to employ respectful techniques while hunting -- respect for the animal should follow through to the table.

Once you have a clear understanding of the issues surrounding transporting harvested game, be sure to follow up with your state's specific guidelines.

Up next, obtaining and properly using permits for transporting harvesting game.

Every state requires a permit to transport harvested game. With these permits com­e specific tagging and transportation requirements.

­Before moving a carcass, you must tag it with a completed field tag that includes your name, address, hunting license number, date and time of the kill. This tag must be written in ink and stay on the carcass until it has been presented to an official game check station. If you don't have an official field tag, you can make one, as long as it has all the required information. If you are unable to attach the tag at the site where you killed the deer, you must attach it as soon as you reach an area where you can do so, like your home, hunting camp or vehicle. In this case, the completed tag must be in your possession while you move the game [source: New Jersey].

Your state might require the carcass to be kept in the county where it was killed until it has been taken to a game check station. It must be checked in within 24 hours of the kill, though some states have a 72-hour requirement. It is usually required that the person who made the kill also takes the game to the check station [source: West Virginia].

When transporting game birds, bear in mind that the head or a fully feathered wing must remain intact and attached to the bird. In South Dakota, pheasants and grouse must have a wing, head or foot attached. One thing to consider when transporting game birds is to not freeze more than two birds together in one package. Freezing numerous birds makes it very difficult for inspectors to identify the species and gender of each individual bird [source: GameBirdHunts].

Each state has laws detailing how the harvest can be moved, and how to do it while reducing the risk of spreading disease. Move on to the next section to learn more about this topic.

After you've transported your game to a game inspection station, the official will band your harvest with a metal band, which must remain on the animal the entire time it is in your possession. This includes when you keep antlers or horns and on game mounts [source: New Jersey].

­A big safety concern with transporti­ng harvested game is the introduction of disease into healthy environments. Chronic Wasting Disease (CWD) can cause harm to big game, while the avian flu is a damaging disease for migratory birds. Areas with documented cases of CWD are popping up all over the country, and many states are adding language to their state regulations concerning transportation of wild game to aid in the containment of these and other diseases.

North Dakota does not have any cases of CWD but incorporated new guidelines for transporting members of the cervid family -- deer, elk and moose, for example. West Virginia has had confirmed cases of CWD and offers the same regulations as North Dakota.

Hunters must not move any cervid from an area of containment, which is any public or private land, where there have been confirmed cases of CWD. The following list details the portions of a cervid that hunters may remove from a containment area:

Not everyone appreciates seeing dead animals tied to vehicles. In the next section, you'll learn about respectful ways in which to transport harvested game.

Transporting Harvested Game Through the Woods

Moving game through the woods can be very difficult, and even dangerous. Be sure to wear orange clothing while moving your harvest (even if your state doesn't require it), and consider putting orange on the animal itself. Keep the animal low to the ground, even if it means pulling it through underbrush. It's important to make yourself easily seen as you move your harvest through the woods [source: Benton].

Hun­ters appreciate the luck of other hunters. All you have to do is drive by any game check-in station and you're sure to see hunters gathered around, telling stories of the hunt and standing proudly by their harvest.

­Nonhunters, though they may understand the thrill of the hunt, might not want to see scores of vehicles parading through town with dead, bloody animals strapped to their trunks.

Even so, hunters must check in their harvest with the option of a variety of locations. Some stations are even in the middle of mall complexes, surrounded by department stores and restaurants.

In an effort to be respectful, not only to the animal but also to the public, some states have incorporated transportation language into their regulations. For example, New Jersey requires hunters to be discreet when transporting game by rinsing away excess blood and gore. The state also requests that hunters position the game so the field-dressed side is facing the vehicle and not the public, and to push the tongue of the dead animal back into its mouth [source: New Jersey].

One of the easiest ways to respectfully transport harvested game is to simply cover the game with a tarp. Not only does this keep the animal hidden from sensitive eyes, but it also protects the game from dirt and road grime, as well as the elements outside.

To learn more about transporting harvested game, check out the hunting and fishing regulations for your state. Odds are they're available where permits and licenses are sold, and on the Internet.

Indiana Outdoor News reported in 2006 that State Representative Duane Dekrey proposed a law that would require big-game animals to be covered. The reporter passed on another story about one of his friends who transported a trailer full of uncovered game from Wisconsin to Indiana. Imagine if you were a passenger in a car on the highway next to this trailer! Might you support Dekrey's proposed law out of respect for the game [source: Indiana Outdoor News]?