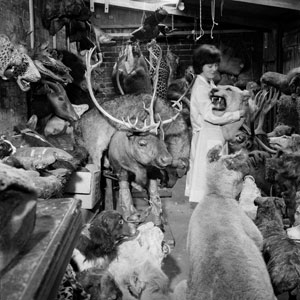 This house of horrors makes one wonder -- is the dog even real?
Chris Ware/Getty Images

Taxidermy was born in England, out of practicality more than anything. When the demand for leather increased, tanning became commonplace. Tanning is the process of turning an animal's skin, or hide, into usable preserved leather, and it made taxidermy possible. When new species of mammals, fowl and fish were still being discovered, naturalists sought to preserve them for classification. Famed British explorer James Cook was one of the early proponents of using taxidermy as he discovered new species during his travels. Charles Darwin was another early taxidermist who sought to preserve his findings at the Galapagos Islands.

Initially, taxiderm­y was a crude and unsophisticated process. Animals were literally gutted, their hides were tanned and then stuffed with cotton or straw and sewed back up for display. These early attempts didn't go over so well, though, because the animal was never properly preserved. This meant that the eyes, nose, teeth and tongue would eventually rot. Thanks to the discovery of the preservative properties of arsenic, taxidermy advanced by leaps and bounds.

In the early 20th century, taxidermy came into its own and became more of a respected art form. Wealthy aristocrats would fill their homes with mounted animals from all over the world. As big game hunting became more popular, so did the practice of displaying wild animals. The process of taxidermy was fairly static over the years until the 1970s. This was when the stuffing stopped. From that point, taxidermists began to stretch the animal's skin over sculpted molds, or mannequins, typically made from polyurethane foam. This is why you should never refer to an animal as "stuffed" anymore -- taxidermists prefer the term "mounted."