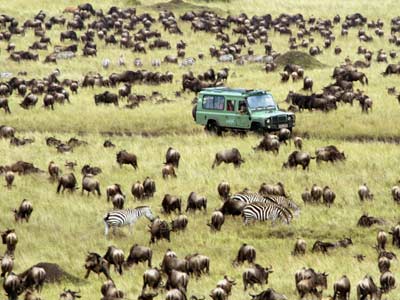 W­e've all watched those documentaries on the­ Discovery Channel that showcase animals roaming through their natural habitats. No matter which animals are featured, you can be sure the show will document its hunting technique. And as much as you want to change the channel when the lioness starts to approach that straggling antelope, your eyes are glued to the screen. You just can't look away while the lion separates that slow, weak antelope and mercilessly claims it for her tribe.

This strategy of separating weak prey from the pack is the basis of a technique of population control and hunting called selective culling. The word "cull" means to separate an animal, usually one that is inferior or weaker than its peers, from its herd. By doing this, predators remove the weak link, in essence leaving the remaining herd stronger.

­Selective culling doesn't have to occur through hunting, but it often does. Many sportsmen say they view hunting as a means of population control, but when they're out there, they focus solely on trophy hunting. They go after the largest specimens, like bucks with multipoint antlers. When you hunt for selective culling, you target the diseased or aged members of a herd. By focusing on these candidates, hunters still get the thrill of the hunt but also cull the herd. As is the case with most hunting techniques, the practice has adamant supporters and harsh critics.

So tear your eyes away from the nature show for a few more minutes and further your education on selective culling. On the next two pages, we'll outline why some support the technique and others disapprove.

Arguments in Favor of Selective Culling

Let's go back to the TV for a moment. As you watch your program, in awe of the circle of life, do you call the morals of the lion into question? Do you judge the lion for killing the stray antelope? Probably not -- and don't feel bad, most people wouldn't. While the image of the mauling may disgust you a little, you don't ha­ve any real qualms with the lion. You just write it off as a part of life. Here, the lion used selective culling to lock down its dinner, and hunters have been known to use this method as well.

­The biggest argument for hunting is that the sport controls overpopulated species that are running out of the natural resources they require to survive. By killing some, hunters make life easier on the others by reducing the need for competition. Now, throw selective culling into the hunting mix.

Many hunters think of selective culling as a humane way to hunt. They aren't killing animals that are strong and in the prime of their lives, but weak ones who probably struggle to get by. If they're diseased, they could be in a lot of pain with no chance of alleviation. Selective culling allows these animals a quick death, as opposed to what might be a long and painful natural death.

By killing the weakest link, some hunters believe that they've helped the herd by leaving it stronger than they found it. The weak member is often easier to track, allowing practice for new or unsure hunters [source: Crusader Safaris]. This also helps make an accurate shot less of a feat, producing a clean, quick kill.

But is this fair? Just because the lion did it doesn't necessarily mean it's OK for humans. Read ahead to consider why others think the practice is wrong.

Bovine Spongiform Encephalopathy, also known as BSE or Mad Cow Disease, was a big problem in the United Kingdom during the late 1980s and much of the 1990s. To control BSE, the government proposed selective culling to destroy all cattle older than 30 months. The project selectively culled the most at-risk cattle and helped reduce the spread of BSE, allowing the exportation of British beef to resume [source: BBC News Online, Ipsen].

The documentary is about to end, and that lion is looking pretty full. Again, yo­u don't have any hard feelings -- hey, a lion's gotta do what a lion's gotta do. But say your next-door neighbor goes out and shoots that sweet doe that's been feeding around your subdivision for years. He can't exactly make the argument that he had to kill her for meat. It might be hard to justify that kill, now that the food chain isn't playing much of a role.

­There isn't necessarily a strong opposition to selective culling as much as there's an opposition to hunting in general. The act used to be a necessity, as it provided the food that humans needed to survive. But these days, most people don't need to hunt.

At least hunters still have that conservation argument to back them up, right? Well, maybe not. Some experts and animal advocates see hunting as an unnecessary means of population control. They say that when left alone, deer and many other animal species can regulate their own population through natural selection [source: BBC News]. The lion preying on the weak antelope is an example of nature taking a natural course. There might be increased competition for natural resources, but that will simply lead to the survival of the fittest (which is basically nature's version of culling).

So, to cull or not too cull -- do you have an answer? At least now you have the facts. For more information, visit the links on the next page.

Yellowstone National Park isn't the kind of place you'd expect selective culling to take place, but in 2008, it did. As members of the largest genetically pure population of bison crossed the park borders, they exposed themselves to the disease brucellosis. Letting them go back to their life in the park would have exposed the rest of the healthy herd to the deadly disease, so park officials made the decision to permanently cull these bison, much to the dismay of animal advocacy groups [source: Robbins].