How to Properly Dispose of Dead Animals

Browse the article How to Properly Dispose of Dead Animals 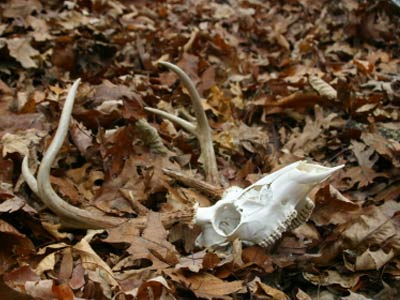 Congratulations! Your first hunting trip was a success, which the bed of your pickup clearly shows since it's consumed by a massive buck. Since you're new to this hobby, it's probably in your interest to take the deer to a professional butcher to have the venison prepared into manageable portions rather than attempting this feat yourself. But in the future, you may want to learn the process of preparing the deer on your own, and one part of that process will be figuring out how to dispose of the unused remains.

Most of the time, if you're a hunter who uses your catch for practical purposes such as food and hides, you will need to consider how to dispose of the unused portions like the bones and entrails. Other times, you might find yourself in a situation where you can't use all of the meat or hide, so you have a majority of the carcass to get rid of. There's also the possibility that you might find a carcass on the roadside near your property with no one to take care of it but you.

In all the situations we described, you'll want to make sure you use proper game handling techniques. Experts strongly advise against touching the animal's remains directly with your hands. It's best to wear a protective layer, such as gloves.

­You have four acceptable methods of disposal from which to choose: landfills, burial, composting and burning. It is improper, and often illegal, to dump animal remains in a body of natural water or on the side of the road for various health reasons. This article aims to inform you about what each method of disposal entails and to explain the importance of proper disposal.

Click to the next page to learn more about the four ways you can choose from when disposing of animal remains.

Ways to Dispose of Dead Animals

When it comes to disposing of dead animals, specifically those animals obtained ­through hunting methods, there are typically four methods to consider: landfills, burial, composting and cremation. When you're weighing your options, you should consider your nearby surroundings. For example, is there a solid waste landfill nearby? Are you far enough away from sources of water? What time of year is it? Do you know of a local composting site?

­The first method you might choose is placing the remains in a landfill. It might cost you to take your carcass or inedible parts to a landfill, so it's important to call your local facility ahead of time to check.

Another way to dispose of dead animals is simply by burying the remains. Burial is economical and easy, but it requires some planning. You want to avoid burying the animal near any water source or an area that's prone to flooding. If the private property is not your own, make sure to check with the owner before breaking ground.

Composting an animal can only be performed in certain areas, so if you choose this option, you would have to look into the regulations affecting your location. There are usually composting sites that handle slaughterhouse remains if you aren't able to create one yourself [source: Hunting for Tomorrow].

Cremation, also known as burning or incineration, is a means of disposing of dead animals that costs money, but it also eliminates any worry you might have about contaminating other species, nearby water or humans.

Read on to learn about why it's important to dispose of dead animals properly.

In addition to game, fish require specific burial procedures. If you're burying fish for commercial reasons, fish can be composted only if the composting site is regularly managed. This method, if maintained properly, prevents fly larvae from growing and prevents water contamination. In residential areas, however, experts advise sealing fish in a leak-proof container and sending it to a regular solid waste landfill. Fish can also be buried if you follow the proper procedures, though residential composting isn't recommended [source: Alaska Department of Environmental Conservation].

Properly disposing of dead animals is important for many reasons, including your health, wealth and the well-being of surrounding animals. In addition, when an animal is properly disposed of citizens who don't hunt have less to critique since they aren't bothered by the sight or smell of the carcass. Since hunters tend to be in the minority of any given state's population, it's crucial to keep up po­sitive relationships with other citizens.

Your health is a major factor when calculating the importance of proper disposal of dead animals. You don't want the animal's remains to spread any diseases to you through direct contact, nor do you want the remains to leach out diseases through the ground. That's why you want to wear gloves when handling the animal directly, and once you choose a method of disposal, make sure it won't leach out diseases into the local water source.

­Your wealth is another factor to take seriously when you are weighing the best disposal method. Though some sanctioned ways of getting rid of dead animals do cost money, it's in the best interest of your wallet to use those rather than dumping the remains illegally. Such unacceptable methods would result in a fine if you were caught by authorities.

Since you appreciate the natural world, it's important to consider the well-being of living animals when you are choosing a method of disposal. For instance, if you bury an animal, make sure vultures can't get to it, especially if the animal was at risk for a disease. You wouldn't want to infect any innocent animals.

Now you're equipped with the basic knowledge of what methods are acceptable when disposing of a dead animal and the importance of properly using those methods. Happy hunting!

Chronic wasting disease (CWD) is a dangerous disease that deer can carry while living. CWD can remain in the environment for years if an infected animal isn't disposed of properly [source: Coggin and Castle].