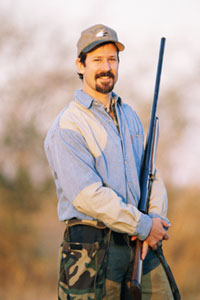 There's no doubt that bird populations are declining in North America, and game birds are among the most threatened. The Audubon Society compiled a list of the common birds that have suffered the most extensive population losses in recent decades, and first on the list was the Northern Bobwhite quail [source: Audubon].

There are many conservation organizations laboring to protect the threatened avian kingdom, but Quail Unlimited (QU) -- although its efforts also help doves and other game birds -- directs itself exclusively to the benefit of a single species. Quail are popular among both birdwatchers and recreational sportsmen. And hunters, despite their penchant for putting birds to death, are a key constituency in the conservation movement. As Theodore Roosevelt wrote a century ago, "The excellent people who protest against all hunting, and consider sportsmen as enemies of wild life, are ignorant of the fact that in reality the genuine sportsm­an is ­by all odds the most important factor in keeping the … valuable wild creatures from total extermination" [source: Roosevelt].

­Quail Unlimited aims to restore the necessary habitat for these birds to thrive. Its members, organized into chapters across the United States, work to educate farmers and other landowners about how to make their land wildlife-friendly. They are also directly involved in habitat improvement projects like distributing and planting seeds, and mowing, spraying and strategically burning land for purposes of wildlife management.

This article will describe the group's mission and numerous projects. However, let's first take a look at how the quail problem emerged.

­Where have all of the quail gone? The long-term decline in quail p­opulations can be attributed primarily to loss of habitat. Quail and other small game have fairly specific habitat requirements. They thrive on a variety of legumes, grasses and weeds that are characteristic of a plant community in "early succession," or the early stages of growth. In the first decades of the 20th century, America abounded in early-succession habitat, with small- and medium-size farms dotting the landscape. Several factors have led to the widespread disruption of these favorable conditions. Agricultural enterprises gradually grew larger and more monocultural, eliminating small family plots, fencerows and biodiversity. Other farms were abandoned, and the land either progressed into late-stage growth or succumbed to urban and suburban sprawl. Novel types of grasses such as fescue and Bermuda grass became popular, displacing the cover that quail depend on for nesting [source: Quail Unlimited].

By the 1970s, when the Endangered Species Act took effect, these changes in the landscape had already brought about a noticeable decline in game populations. Quail Unlimited arrived on the conservation scene in 1981 as the first group formed specifically to confront the quail problem. The first chapter formed in Augusta, Ga. [source: Pavey] Today, the organization has more than 800 chapters in more than 30 states. Quail Unlimited staff members work at the national headquarters in South Carolina [source: Quail Unlimited]. A team of regional directors and wildlife professionals assists chapters in their efforts to create and maintain suitable quail habitat on both private and public land.

In 1993, Quail Unlimited formed a funding partnership with the National Fish and Wildlife Foundation, an organization chartered by Congress to steer conservation dollars toward worthwhile projects. The two entities work together to secure federal grants for projects initiated by Quail Unlimited chapters, with matching funds and in-kind donations provided by Quail Unlimited. The organization cooperates with other government agencies such as the Forest Service and the Bureau of Land Management for habitat restoration on federal lands [source: Quail Unlimited].

Though the history of a group is important, what's more crucial to success is its mission. Move ahead to the next section to learn the mission of Quail Unlimited and why people are called to it.

Practice What You Preach

The national office of Quail Unlimited is located outside the town of Edgefield, S.C. The building "stands on 90 acres [36.4 hectares] of QU prescribe burned and actively managed habitat" [source: Quail Unlimited].

­The Web site of Quail Unli­mited declares that the group's "overall vision is to restore America's quail populations for future generations" [source: Quail Unlimited]. QU believes that the most direct way to achieve this goal is through habitat improvement -- toward that end, QU chapters designate their own field projects, paying for them through local fundraising events as well as grant disbursements. Over the past several years, chapters have spent millions of dollars improving habitat conditions [source: Quail Unlimited]. Chapters also conduct outreach and education efforts with local landowners to promote land management practices beneficial to upland game birds. As the saying goes from the movie "Field of Dreams," "If you build it, they will come."

More than any other activity, Quail Unlimited members are known for planting seeds. The organization's National Seed Program receives and distributes millions of pounds of surplus grain seed donated by national seed companies. QU volunteers then plant the cover crops -- such as alfalfa, sorghum, sunflower and soybeans - which provide needed winter feed for quail. The organization boasts of planting seed on nearly a million acres (404,686 hectares) over the past five years, as well as planting hundreds of thousands of shrubs and trees. Quail Unlimited also sells its own brand of food plot mix, consisting largely of sorghum varieties adapted to different types of climate and soil [source: Quail Unlimited]. Other habitat practices of QU chapters and affiliated members include targeted spraying and prescribed burns.

Introduction, History, Mission, check. What do you do if you'd like to become a QU member and join efforts to save the quail? For starters, you can check out the next section.

Quail Unlimited has a substantial list of corporate sponsors, several of which provide discounts to QU members. A similar, but unaffiliated, nonprofit organization known as Quail Forever has entered into a similar arrangement with the biotech giant Monsanto, manufacturer of the highly successful but controversial pesticide Roundup. Monsanto has pledged to donate $1 to quail conservation efforts for every gallon (3.79 liters) of certain Roundup varieties purchased [source: Quail Forever].

Still­ mulling over whether Quail Unlimited is for you? Here's some specific information on what membership with QU means.

­Quail Unlimited is a membership organization. Most members are associated with one or more of the group's "covey" of local chapters, but there are also members-at-large. Individual chapters raise most of the funds for local conservation projects by organizing events such as banquets and sporting clay-shooting contests. In addition, the national organization sponsors several events, like the annual Celebrity Quail Hunt and the annual QU Bass Pro Shops National Sporting Clays Tournament [source: Quail Unlimited].

Individuals may join at the annual membership rate of $30 (the youth rate, for those under 18 years of age, is $10), sponsor two youths with a Mentor Membership ($50) or join at the Sentry, Sponsor or Life Membership levels. All members receive a year's subscription to the organization's bimonthly magazine, as well as a complementary subscription to Gundog, Wildfowl, or Petersen's Hunting magazine. Members can also take advantage of values offered by some of Quail Unlimited's numerous corporate partners. For example, QU members may receive discounts on purchases of Kubota tractors, Land Pride tillers, seeders and discs, power tools from ECHO, sprayers from Wylie and tires from Tire Kingdom [source: Quail Unlimited].

As a member of QU, you will receive access to a national network of like-minded people who work to maintain the quail population, game conditions and hunting opportunities. If you believe membership is the best option for you, visit the organization's Web site or contact QU for further information. You certainly have a good basic knowledge now for whatever you want to pursue.

Individuals supportive of the mission of Quail Unlimited are encouraged to make tax-deductible donations in the form of cash, securities such as stocks and bonds, or personal property, particularly firearms, to be sold or auctioned.