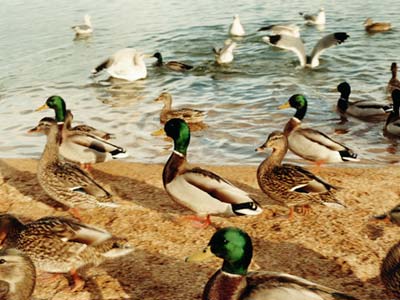 Many conservation groups are created because of the desire to help animals or to conserve natural resources. Few groups are started based on an idea blown in by dirty winds during a war and immediately following a massive economic depression.

Ducks Unlimited (DU) has a rich and resourceful history that started with very humble beginnings during one of the country's worst periods. It's grown by leaps and bounds to become one of the world's most recognized conservation organizations.

Though founded by sportsmen to help save declining waterfowl populations, DU works for more than just birds. The wetlands they create, restore and maintain are meant to be home to many diverse species of animal and plant life. Their work benefits waterfowl, hunters, wildlife and our environment.

In this article, we'll look at the early years, when John Knapp founded Ducks Unlimited and then continue to follow DU through the milestones it has enjoyed over the years. From increased waterfowl populations to more than 1 million members, DU has succeeded in making a name for themselves among conservation ­groups [source: Ducks].

­The mission of Ducks Unlimited covers more than just increased duck populations. Their vision and code of values encompasses ethics, team work, wise financial investments, passion, decisions based on science and credibility, and of course, waterfowling. The article also covers their mission and whether DU has been successful in achieving their conservation goals.

If you find yourself interested in Ducks Unlimited once you start reading, the article also has information on how to become a member, as well as other ways to support the organization and the more than 900 species of wildlife it conserves and protects.

As with most things in life, it helps to start at the beginning. Read on to discover the history of Ducks Unlimited.

During the period of the 1930s called the Dust Bowl, the country lost many wetlands and w­atched the number of waterfowl and other wildlife drop to dangerously low numbers. In order to preserve the waterfowl they loved, a small group of conservationists formed Ducks Unlimited in 1937.

The 1940s brought the following results to DU:

Since then, Ducks Unlimited has grown to become the largest waterfowl and wetland conservation organization in the world, having more than one million members, and more than 12,283,871 acres (4,977,106 hectares) of conservation land in North America [source: Ducks].

Read on to discover the mission of a group that has had success for more than 60 years.

"The vision of Ducks Unlimited is wetlands sufficient to fill the skies with waterfowl today, tomorrow and forever," something they've been achieving for more th­a­n 60 years by working together and staying focused [source: Ducks].

­Each member of DU is guided by the single mission that unites the group as a whole. Ducks Unlimited works to conserve, restore and manage wetlands and associated habitats for North America's waterfowl. These habitats also benefit other wildlife and people [source: Ducks].

Ducks Unlimited mission is based on the following core values:

Knowing that the waterfowl in America breed in the prairies of Canada, DU originally began by raising money in the United States for Canadian waterfowl conservation. Today, Ducks Unlimited conservation projects span the Northern Hemisphere, focusing on areas where waterfowl migrate, winter and breed. DU has critical projects located throughout North America, as well as Mexico and areas of the Caribbean and Latin America. Since its inception in the 1930s the group has raised more than $2 billion of support for its mission, and applies 87 percent of its monies to waterfowl and wetland conservation [source: Ducks].

If you're wondering what it takes to join this conservation group, read on. Our next section details how to join and what the benefits are.

Ducks Unlimited was founded by waterfowl hunters who understood the continued existence of North American waterfowl rested on the conservation of bird and land. Today, 90 percent of DU members are hunters [source: Ducks]. One hundred percent would describe themselves as conservationists.

Ducks Unlimited offers many ways to join or support waterfowl and wetland conservation. If want to support this cause but don't have any spare pocket change, there a­re numerous opportunities.

Volunteer -- Duck lovers and conservationists can support DU by volunteering. More than 60,000 DU volunteers hold more than 4,000 fund raising events that increase awareness and support for the DU vision. You can volunteer at a local chapter or promote DU as a government affairs team member, university chapter volunteer or a wildlife art auction specialist.

Greenwing memberships -- These memberships are for youth ages 17 and under. Kids receive decals, certificates, magazine subscriptions and access to special sections of the website.

Subscribe -- Adult members can join DU for a small annual contribution and will receive a membership card, decals, magazine subscription and access to members only sections of the website.

Get an acre of wetlands -- For a donation of $250.00, DU will turn it into a wetland acre (.4 hectare). You can save an acre in different areas across North America.

Attend -- Go to a DU event in your state or anywhere across the country. Thousands of DU events are held each year.

If you find yourself passionate about conservation, consider joining a group such as Ducks Unlimited. For more information, visit the links on the next page.

Anyone interested in Estate Planning can learn more by visiting http://ducksgifts.org, or by contacting Jon Rich, the National Director of Gift Planning at the National Headquarters address. For more information about giving Gifts of Land and the Wetlands American Trust, contact their national headquarters.