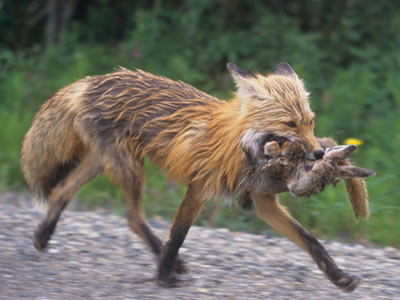 Would foxes make off with much more if there was no predator hunting?
Hugh Rose/Visuals Unlimited/Getty Images

Though laws vary from state to state, ­there are ac­tually very few restrictions when it comes to killing predators. In some instances, there are no specified seasons for this type of hunting or limitations on how many predators a hunter can kill.

Many predator hunters enjoy the sport for the thrill of matching wits with such a cunning foe, but what of the claim that they're providing a public service? Many states already have some sort of animal control program, leading one hunter to posit in a guidebook that predator hunters could save states taxpayer dollars by taking matters into their own hands [source: Spomer].

In 2004, a study at the University of Stirling made the first attempt to determine the impact predators have on livestock worldwide and whether predator hunting made any difference on livestock losses. The researchers found that the data doesn't support the predator hunters' claims; in some areas, only 3 percent of livestock losses were attributed to predators, and that number didn't seem to change based on whether fewer or greater predators were present in the area [source: Gosline].

­But these days, especially since the fox in the henhouse doesn't threaten human survival quite as much as it used to, many parties, including environmentalists and government agencies, wonder if predator hunting is necessary. After all, in some cases, predators have been hunted to the edge of extinction, only to be expensively reintroduced to certain habitats. Is the benefit provided to livestock owners, particularly if that benefit is poorly supported by data, enough to compensate for these kind of costs?

Environmentalists are also up in arms about contests of predator hunting and calling, which are particularly popular in the western United States. While the old excuse about doing the ranchers a favor may have helped predator hunters get by before, the activity becomes particularly abhorrent to animal rights activists when it's done purely for sport or for money.

For more on hunting, see the links below.

It could be argued that we wouldn't need predator hunting in the first place if man hadn't tampered with natural ecosystems with development, and that man is in essence playing God to decide who can stay. One famous example from literature demonstrates the danger of man's power in hunting. In Richard Connell's short story "The Most Dangerous Game," big game hunter Sanger Rainsford finds himself the prey of fellow hunter General Zaroff. Because Zaroff wants to match wits with an animal that can reason, hunting man is the only true hunting challenge left.