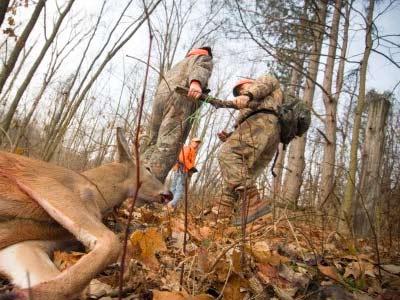 Just about everything is more fun when done in a group -- and outdoor activities like hunting and fishing are no exception.

In a sport that requires hours of patience, it can get pretty boring to go it alone. And anything that's fun to do can be even better when you can share the experience with your best friends or family. It seems like group hunting or fishing is a no-brainer. However, a specific type of group hunting, called party hunting, is a very controversial aspect of the sport -- and is even illegal in some states.

Hunting in a group -- anywhere from just you and your best buddy to your entire extended family -- can be fun, thrilling, even bonding. However, even though you're partaking in the hunt with a group, it's still an individual activity. You have the specific deer or fish you killed, and if you hit your limit, you're d­one -- and if you don't, then you go home a little light. In party hunting, however, the group will "help out" a hunter who isn't reaching his limit by killing for him, and counting the extra animals under his limit.

­For example, say you're hunting rabbit. The daily limit is four. You, your father, your sibling and your two cousins go hunting, but no matter how many there are in your group, you can each only take four rabbits for a group total of 20 rabbits. But let's say your sibling is a really bad hunter, and the rabbits are proving too much for your sibling's limited skills. Your sibling only shoots one while the rest of you have each bagged your four. In party hunting, other members of the group would shoot an extra three rabbits to reach the group limit of 20.

Although this is something that is frowned upon by many hunters -- and is illegal in several states, many hunters and anglers have taken part in a party hunt or know someone who has. Read on to find out why some outdoorsmen support party hunting.

Arguments in Favor of Party Hunting

For some,­ party hunting has been a longstanding tradition. As this outdoor activity is often done in groups, then as long as they stay within the group's total limit, they see no issues with the practice. The limits, and therefore populations, have remained intact.

Hunting is often used to control overpopulation. Supporters of party hunting argue that especially in states with a high deer population, party hunting could increase the success of the group and better control the population [source: Leier].

­Johnny's just a bad shot. Grandpa's eyes are having a harder time seeing long distances. Mary's new at walleye fishing so she's not very good yet. In all of these scenarios, fellow hunters and anglers believe that their friends and family shouldn't be penalized for their various shortcomings. If you can help them out by shooting an extra buck, what's the harm in allowing them to get some game?

In addition, for some, it's even more serious. Hunting may not just be about sport but about serious nourishment. Without that meat, a family may go hungry. Supporters believe that if someone depends on the meat, it doesn't matter who makes the kill.

In other cases, it's a mere matter of convenience and timing. If your group is hunting a heavily wooded area and trying to drive out pheasants, party hunters will then set up a poster, or shooter, to get the escaping game.

Many hunters, however, find that no matter the justification, party hunting is still unethical. Read on to find out their side of the debate.

It's a Fine Time to Hunt

Thinking about party hunting? Make sure you do it somewhere that it's legal. In Wyoming, party hunting offenders can face fines of $500 and the loss of years of hunting privileges [source: Wyoming Game and Fish Department]. However, the fines and penalties can be even more stringent. In 2007, four Sheridan hunters got overzealous when party hunting, whereupon they fired into a herd of elk, killing at least 10 of the animals while leaving most of the meat to rot. The men's collective sentences amounted to more than $23,000 in fines, 42 years of lost hunting privileges, a year in prison and four years of probation [source: Wyoming Game and Fish Department].

You can locate someone else's game, dress it, pack it, even eat it -- just not shoot it­. That's the philosophy of those against party hunting, and the mantra of the states in which party hunting is illegal.

­Though supporters of party hunting believe the practice will allow them to take more game, in the end, party hunting could hurt their chances of even getting a deer license. In states like North Dakota, the state issues only a limited number of certain special deer licenses [source: Leier]. Looking to tag a whitetail buck? Unfortunately, the state issued a limited number of licenses and the guy before you bought a license for himself, his wife and his two young children. The wife and children have no interest -- or plans -- to hunt, but by applying the practice of party hunting, that guy grabbed the last four licenses. You came too late, and now have no opportunity for a license until next year. Meanwhile, he's busy taking four bucks home himself.

In addition, such states issue all licenses based on how much game is out there to be hunted. If party hunters are very successful, state agencies would most likely then reduce the total number of licenses issued because the number of available game to hunt is reduced [source: North Dakota Game and Fish Department].

Groups can be made up of very different people, and one aggressive shooter may hunt for the entire party, ruining it for others. It can also be very frustrating to poor, new, or young hunters. Remember Johnny and Mary from before? Even though Johnny might be a bad shot, he'd rather go home empty-handed than have to take another hunter's kill. And Mary's frustrated by her first walleye fishing experience because the more experienced anglers caught the entire group's limit before she could even get a single bite. Unable to take her own fish, Mary grew tired of the activity instead of being given a chance to enjoy the sport.

Now that you know both sides of the issue, next time someone brings up party hunting, you'll be able to decide what's best for you.

Unsure about your own hunting ethics? Only you can decide where they lie, as conservationist Aldo Leopold wrote in , "A peculiar virtue in wildlife ethics is that the hunter obviously has no gallery to applaud or disapprove of his conduct. Whatever his acts, they are dictated by his own conscious, rather than a mob of onlookers. It is difficult to exaggerate the importance of this fact." [source: Utah Wildlife Review]