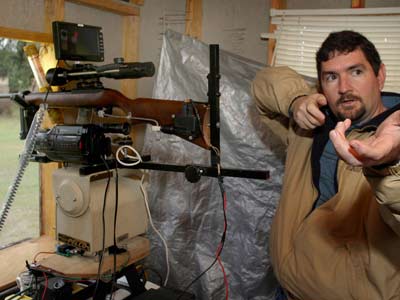 John Lockwood, owner of an online hunting and shooting Web site, demonstrates how one can use the internet to shoot targets on a ranch outside Boerne, Texas.
Jack Plunkett/AFP/Getty Images

­Hunting season has ended, but you're not ready for it to be over. It used to be there were only two options: play deer-hunting games or participate in simulations online. But now, there's another option:­ Internet hunting. This recent phenomenon has caused controversy in the hunting community, but why?

In 2005, a Texas rancher began using a remote-controlled .22-caliber rifle and a camera set up on the Internet to provide hunters with access to game animals on his ranch, such as wild pigs, sheep, blackbuck antelope and Barbary. He charged fees for the remote hunting sessions, a DVD recording of the session, taxidermy and meat processing [source: BBC].

The game animals were kept penned, lured to a feeding station near a spot where a rifle was mounted, and shot at close range. If the shot did not kill the animal at once, or if the person missed, workers at the ranch killed the animal. The trophy was then shipped to the remote hunter [source: Humane Society].

­This practice resembled that of the canned hunt, in which both native and exotic species were kept penned in fenced enclosures, awaiting hunters who picked them off at short range. The animals came from zoos, breeders, circuses and animal handlers. Yet, Internet hunting went a step beyond the canned hunt.

The founder of Internet hunting believed the practice could be a boon to hunters who were disabled and no longer able to go out into the woods. It also was less expensive than flying to Texas [source: BBC].

However, Texas soon became one of more than 30 states to ban the practice amid concerns for the well being of the animals and for a game that allowed the use of weapons at a distance [source: Fox News]. The Texas rancher's Web site was removed, though others soon took its place.

Internet hunting has its foes. Some even question whether the practice should be legal. Read on to find out more about the legal and ethical issues.

The Legality of Internet Hunting

In Texas, where Internet hunting originated, laws regarding hunting were set up for­ so-called regulated animals such as birds or deer. Lawmakers could not have foreseen the practice of long-distance hunting [source: BBC]. However, as soon as Internet hunting began, legislators took action amending laws to make providing or participating in Internet hunting illegal. Various animal rights groups have also risen to the cause against Internet hunting. The U.S. Humane Society, for example, has supported legislation for a federal ban on it.

­The same month that the inaugural Internet hunting event was scheduled, Virginia became the first state to ban remote-control hunting. Republican delegate G. Glenn Oder, who introduced the bill in the state legislature, claimed to have the only bill of the session to win support from two organizations rarely in agreement: the American Society for the Prevention of Cruelty to Animals (ASCPCA) and the National Rife Association (NRA) [source:Moreno].

Brad Sherman, a Democrat from California, and Tom Davis, a Virginia Republican, introduced the Computer-Assisted Remote Hunting Act, H.R. 2711 to the U.S. House of Representatives [source: Humane Society]. Davis wanted the practice to carry a penalty as high as a five-year prison term. During the summer of 2007, the bill was referred to the Subcommittee on Crime, Terrorism, and Homeland Security.

A similar bill, S.2422, has been introduced in the U.S. Senate. After being read twice, it was referred to the Committee on the Judiciary in December 2007. Because the Internet is both interstate and international in scope, lawmakers argue that federal legislation is needed.

But what about the other side of the argument? Aim your site on the next section to find out.

California state senator Debra Bowen, who introduced the bill banning remote control hunting in California's legislature, took exception to the concealed weapon on a stand. It reminded her of Lee Harvey Oswald, sitting on the sixth floor of Dallas's Texas Book Depository, waiting for President John F. Kennedy's motorcade to pass by in November 1963 [source:Moreno].

Arguments in Favor of Internet Hunting

The first person to sign up for Internet hunting at the Texas-based site was a paraplegic who lived several states away. No longer able to hunt after breaking his neck in an accident nearly 20 years earlier, the man was excited to be­ able to hunt again. He asked for a particular animal that he did not see and chose not to kill the more readily available deer instead [source: Axtman].

Another client was an American soldier in Iraq, unsure when his next hunting trip back home might be. A third client was another U.S. soldier who wanted the meat sent to his family [source: Axtman].

The Texas entrepreneur who brought remote-control hunting to the Internet claims that his concealed weapon, mounted on a tripod, equates to the way that hunters conceal themselves with blinds. He also says that pulling a trigger and clicking a mouse are the same action. Why then, he asks, should hunters be deprived of the thrill of hunting because of injury or distance [source:Moreno]?

Despite the possible advantage that Internet hunting offers to the disabled or those in the armed forces, very few people or organizations embrace the idea of computer-assisted remote hunting. There are always two sides to any argument, so what does the other side have to say about Internet hunting? Read on to learn some of the reasons that people are up in arms.

Many western states are usually opposed to gun control legislation. But what do they say about Internet hunting? Let's look at Utah, for example. Utah is one of only seven states in the country without laws against cruelty to pets -- a nod to ranchers who fear that branding cattle may be affected by such a law. Yet, Utah has rushed to support legislation banning Internet hunting. Like other western states with a relatively small population, lots of available land and a tradition of hunting, Utah would be a likely spot for a hunting preserve to be used online. Even still, Utah residents want to keep that kind of hunting out of the state [source: McDonough].

The t­erm "fair chase" is used to describe a major element of hunting. It refers to a physical presence in the field with the animals, using a bow or a firearm, as part of the sporting tradition. Opponents say that clicking a computer mouse long distance is a far cry from that tradition [source: Humane Society].

­Surprisingly, organizations like Safari Club International, which supports the hunting of exotic trophy animals, and the National Rifle Association both oppose Internet hunting [source: Humane Society]. Even hunters themselves have spoken out against computer-assisted remote hunting, citing the need for maintaining good sportsmanship and the physical experience of hunting in nature. Many hunters view traditional hunting as a time to share with friends and to get away from civilization or as an opportunity to provide their families with food. They distinguish between hunting and killing [source: Axtman].

Another argument against the practice of remote-controlled hunting is that it doesn't require any knowledge of state or local laws regarding hunting or wildlife. Other concerns include the distancing of the hunter from the act of killing, so that it becomes a way to be desensitized to death. Furthermore, it extends no respect to animals. Yet another issue is the potential danger to humans at the ranch site. Although the workers there have the ability to override a remote hunter's shot, some fear that such technology is dangerous to humans [source: Animal Protection Institute].

One thing is fairly clear: Those in favor of Internet hunting, who deny that the practice is unsporting, will continue attempting to provide it. Mention has already been made of the possibility of an offshore game hunting preserve [source: Humane Society]. Whatever your views on Internet hunting, this is one practice to watch closely.

NRA to the Rescue

The National Rifle Association (NRA) already has in place a special program to assist disabled hunters. Its program, however, is aimed at helping them get to shooting events or into the field. The NRA carefully monitored legislation against Internet hunting to make sure it did not discriminate against disabled hunters using electronic wheelchairs in the wilderness [source: Axtman].

Does deer hunting reduce car accidents?
How Hunting Preserves Work
How to Set Up a Tree Stand