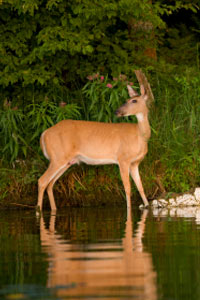 It's human nature to look for the most successful or easiest way of getting something done. Sure, there are exceptions to any rule -- people who always seek ou­t a challenge. But if there's a tried and true method for making an act easier, or increasing the possibility of success, that method is going to be pretty popular. That gives you a rough idea about why so many hunters use deer baiting.

Deer baiting is strategically placing a pile of food near hunting blinds or clearings in hopes of luring a deer (or bears) into close range. It is seen as useful for precision and accuracy, which are especially challenging in bow hunting. Many states have regulations in place regarding content, seasons and volume, but it gets tricky to regulate between baiting and feeding.

Feeding is a similar practice; it just doesn't yield the same result. People who place feeding piles out usually do so with the intent to attract wildlife onto their property. They do not hunt those animals or allow others to use their pile as bait.

Deer baiting, however, is not without controversy. Fair Chase, which is a set of ethics many hunters live by, states that sportsmen shouldn't have an unfair advantage over the animal. Some people think that baiting might give a hunter an unfair advantage. The lack of a clear answer is what makes deer baiting a controversy, not only in the hunting vs. anti-hunting world, but within the hunting community also.

Deer baiting isn't a simple issue, especially when you begin to consider what other effects deer baiting has outside the world of hunting ethics. The rest of the article will touch on those effects.

Not sure if you're pro deer baiting or against it? Read on to discover two important aspects of the vigorous debate.

We all know when it's cold season. Once that first co-worker gets the sniffles, sneez­es and headaches, it doesn't take long for his cube-mates to start reaching for the tissues. Before you know it, all of finance is out sick, and HR's looking under the weather. It's tough to avoid catching an illness when it's all around you, and that's the idea behind bans on deer baiting.

When deer congregate together, often repeatedly at a bait pile, they come into close contact. They spread germs and diseases among each other as they lick, touch noses, sneeze, breath, urinate and defecate near the bait pile [source: Sperling]. Once these disease start to spread they can be hard -- and extremely expensive -- to contain.

­Baiting can also have lasting impacts on the animal, causing changes in the feeding patterns, reproduction habits, overall behavior and migration [source: Sperling]. If they know there's a bait pile in your back yard, they stop hunting for it themselves and become dependant upon you. And often, the bait doesn't meet the nutritional value that deer need. If the bait is too high in carbohydrates or starches, as is often the case, it can cause damage to the digestion process, sometimes resulting in death.

The reasons behind deer bait bans don't have much to do with ethics, although ethics are important in the overall debate. States step in and ban baiting when they believe it's in the best interest of eliminating the spread of disease among deer. Bans are becoming a widespread trend as 27 states, including Michigan, Minnesota and Wisconsin (popular deer hunting states), already have partial or full bans in place [source: Alabama Wildlife].

But to every good debate, there are two strong sides. Read on to hear why baiting won't go down without a fight.

Unfortunately for deer, there are quite a few daunting diseases out there. While there are big ones you've probably heard of, such as bovine tuberculosis, there are plenty of less known diseases that are just as bad. Demodectic mange will cause hair loss and lesions while parasite transfers could result lung or stomach worms [source: Alabama Wildlife].

Arguments in Favor of Deer Baiting

Many hunters feel that banning deer baiting will change the spo­rt in a big way.­ Without a doubt, the biggest argument in favor of deer baiting is based on the perception that baiting increases a hunter's success [source: Toso]. If baiting is banned completely, many hunters believe they won't be hitting the buck poles nearly as often, if at all. And as hunting is used as a method for natural resource and species conservation, couldn't ridding the world of it have negative side effects? If hunting success rates go down, then wouldn't that have an adverse effect on future deer populations as competition for food and space increase? That answer isn't clear, but it's a concern for many sportsmen.

Bow hunters feel especially strong about deer baiting. To obtain a clean, quick kill, which is revered in the world of ethical hunting, a bow hunter must hit the target in a specific manner. Without baiting, it would be more difficult to get close enough to ensure the clean kill. Bow hunting is a challenge as is, but if baiting was eliminated from the table, the sport could completely die out [source: Muskegon Chronicle].

Because baiting and feeding are so similar, bans on baiting could mean feeding must end too. Many homeowners would miss this practice.

It's no wonder hunting is such a controversial topic when it's such a diverse sport. But as baiting bans increase in popularity through out state legislatures, perhaps new, more definite information will put an end this aspect of the debate. To learn more about both sides of the deer baiting debate, check out the links on the next page.

Who Would Feel the Effects of a Baiting Ban

While there is no proof or precedent to support the claim that baiting bans would diminish overall hunting success rates, bans would not doubt be felt. In Michigan, where bans have been recently put into place, bait sellers are feeling adverse effects. Not knowing the ban would take effect in 2008, most farmers had already put together their homemade bait stock, which they sell to make a living. With this change in law, many producers will recognize devastating losses this year [source: Muskegon Chronicle].