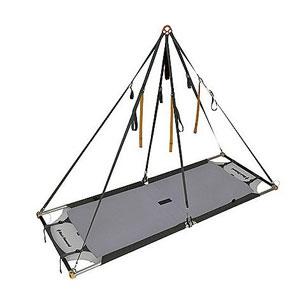 Sleeping on a ledge is certainly one way to gaze at the stars.
Amazon.com

Rock climbers like to live on the edge -- and sleep on one, too. Sleeping on a rock ledge is standard practice for the serious rock climber on multiday excursions. But when no natural ledge is around, the next best thing is to bring your own. Portable ledges, known as portaledges, are hanging cots that allow climbers to set up a bed or storm shelter for themselves during a climb.

Before portaledges came about, climbers determined to undertake an overnight journey with no natural ledges had to resort to hammocks. They used to require two anchors, however, and leaned against the rock wall. These early hammocks, which easily got soaked next to the rock and were painfully uncomfortable to sleep in, made overnight excursions difficult.

By the 1960s, crafty and unscrupulous climbers at Yosemite National Park would make off with cots from the camps. With these cots, made of canvas over a steel frame, they fashioned an early version of the portaledge and provided themselves a more comfortable bed than the hammock. In 1972, the first collapsible portaledge was introduced Lowe Albine Systems. In the 1980s, Mike Graham of Gramicci Products, Russ Walling of Fish Products and John Middendorf of A5 Adventures were all putting out their own portaledges. Middendorf in particular is credited with perfecting the design with a bomber portaledge (a secure portaledge strong enough to withstand rough storms).

The portaledge itself is a simple construction much like a cot, consisting of a frame of metal tubing (often aluminum). Cloth (usually nylon) is stretched over the tubing to form the bed. Only requiring a single anchor, portaledges are supported by four- or six-point suspensions. These straps spread from a central hanging point and are attached to the four corners and (for six-point suspensions) middle of the metal frame's sides. It ends up looking exactly like a hanging tent.

We'll discuss some important features and qualities to consider when selecting a portaledge.

Don't just think about how much sleeping space you'll get in a portaledge, but also how much room you'll have for storing your gear, if you need it. Portaledges come in single or double varieties. The doubles have enough room for two people to sleep -- or for one person and lots of gear. Double versions often come with "shark fin" dividers. Many come with loops sewn into the suspension straps, so you can easily hang your gear.

Another important element to consider is the rain fly. Some climbers like to risk a big wall excursion even if the sky is threatening a storm. In this case, it's a good idea to bring a portaledge with a reliable rain fly, even if you don't plan to sleep overnight. Others might want to risk an overnight trip without a rain fly, but experienced climbers say to always expect a storm and come prepared [source: Long].

Don't underestimate the importance of ease of assembly, either. If a storm is rolling in quickly, or you're tired after a hard day's climb, you won't want to waste time or energy putting together a complicated portaledge. Furthermore, if a portaledge has a lot of loose parts, they could be in danger of falling, making safe assembly impossible. Look for a portaledge with few loose parts and an intuitive assembly.

Perhaps the most critical aspect to consider is weight. It's easy to make your load too heavy by selecting a portaledge with lots of attractive frills and features. Instead, simplify your needs and look for a portaledge with a big space-to-weight ratio.

Some popular brands include Black Diamond, Metolius and Fish Products. When you're working with a portaledge for the first time, practice setting it up on a tree at a safe distance from the ground. (Speaking of trees, portaledges aren't exclusive to rock climbers: Big tree climbers use them as well.)

Above all, be safe. If you plan on cooking on your climb, don't cook in the portaledge itself. Instead, put any stove in a belay seat near the ledge, ideally clipped to an independent anchor.

With a reliable, lightweight, stormproof portaledge, you can really build a castle in the sky.

5 Luxury Services That Cost Nothing in the Wild
How do I keep my kids safe at the pool?
How are whitewater rapids classified?