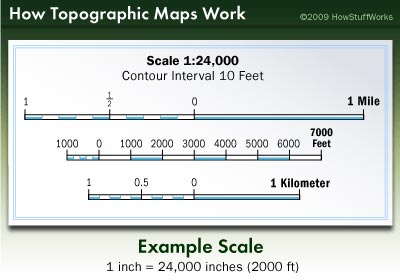 Another thing you need to understand about a topographic map is scale. Obviously, maps aren't life-sized. Otherwise we'd never be able to fit them in our backpacks. Instead, cartographers plot maps on a ratio scale, where one measurement on the map equals another larger amount in the real world.

The first number of the scale is always one. It's your unit of measurement, usually an inch. The second number is the ground distance. For example, if your U.S. Geological Survey (USGS) map has a scale of 1:24,000, it means that one inch on the map is equal to 24,000 inches (2000 feet or 609.6 meters) in the real world. Your map's scale legend will always be at the bottom.

A 1:24,000 map is large and provides a lot of detail about the area -- it will include buildings, campgrounds, ski lifts, among other things. You may also see footbridges and private roads on a map of this scale.

It requires about 57,000 maps at this scale to cover the 48 contiguous United States, Hawaii and territories [source: USGS]. However, you can find maps of various areas at all different scales. The scale corresponds to its intended use. For example, township engineers generally need extremely detailed maps that show sewers, power and water lines, and streets. The common scale for these maps is 1:600. If you want to see one large area on a single sheet but with less detail, a smaller scale map like 1:250,000 is better.