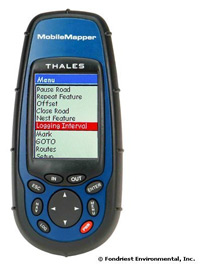 To find a cache, you'll first need the correct coordinates. There are many Web sites with searchable geocache databases, like Geocaching.com. Some sites require you to create an account before you can access their information, but the process is usually free for basic membership. You'll probably want to look for a cache that is pretty close to where you live. Most sites provide a rating telling you how difficult the terrain is or how hard it will be to find the cache once you're in the right location. If the cache entry has comments from other players, you'll probably want to read those as well.

Now that you have the coordinates for your first cache hunt, it's time to gear up. The most important piece of equipment for nearly all geocache hunts is a GPS receiver. Without the receiver, you're going to have a hard time figuring out which way to go or how close you are to the cache. Receivers, at the very least, provide you with a direction and a distance to the coordinates you program into the device (called a waypoint).

Before you make a trip out to an unfamiliar place to hunt for a cache, it's very important that you learn how to use your new GPS receiver. Not all receivers are alike. You'll also want to check your receiver's accuracy. One way to do this is to pick a marked location and check your coordinates using the receiver. Then, leave the area and program the location's coordinates into your device, using it to guide you back to the site. This way you can see how close the receiver will help you get to a set of coordinates, giving you an idea of how large a search area you'll need to deal with when on a hunt.

Another vital item is a good topographical map of the cache's general location. A GPS receiver is great, but it won't tell you if there's a river or chasm between you and your destination (unless you purchase a receiver that can store maps, of course). To avoid nasty surprises, it's important that you have a good idea of what you're heading into before it's too late. Few things are more frustrating for a geocacher than the discovery of an impassible obstacle between him and his goal. It's also important to determine if your map used NAD27 or WSG84 to calculate coordinates -- you want to make sure that the coordinates in your receiver and the ones on the map refer to the same location.

In the next section, we’ll look at some optional equipment you may want to bring along on a hunt.

Geocachers use coordinates to find a cache. Coordinates list the position of a location through latitude and longitude. To calculate this position, GPS uses a geodetic datum, which is a system that defines the orientation of the coordinate system. The most current geodetic datum is the World Geodetic System of 1984WGS84), and most GPS receivers are set to it automatically. Before that, cartographers used the North American Datum 1927 (NAD27) to calculate longitude and latitude. The two systems may give two different sets of coordinates for the same physical location.