Camping Checklist: What You Need to Know About Weather 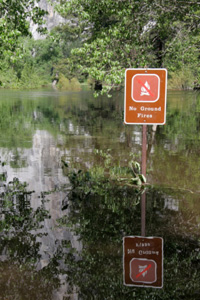 OK, this is pretty funny, but in general, flash floods are no joke.
©iStockphoto.com/Thinkstock

The whole point of going camping is to get closer to nature and enjoy the great outdoors. But sometimes, nature can be fickle. Here are a few types of weather to watch out for while camping:

Thirty-six people died in avalanches in the U.S. over the 2009-2010 winter [source: Forest Service]. Here are a few red flags for avalanche risk:

Flash floods strike without warning and can be deadly. Here are some things you should know:

Did you know that nearby forest fires can generate enough dust to create a static charge and cause lightning? Here are some other lightning basics:

There are other things that are OK to outrun on a camping trip, however. From kites to bikes, find our list of not-so-essential (but fun!) stuff to pack next.