What is the Death Race? 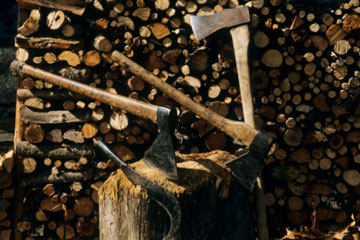 In the 2009 Death Race, participants were required to quarter 20 logs with an ax.
Emilio Simion/Getty Images

Hey, you hardcore fitness enthusiasts out there. Are you bored with running, swimming and cycling in triathlons? Does a 78-mile (125.5-kilometer) ultramarathon across the African desert or a bike ride up a mountain in Idaho no longer satisfy your masochistic urge? No problem. There's an even more extreme event for you.

The annual PEAK Death Race, held each summer in Pittsfield, Vt., is so brutal that entrants are required to sign a fatality waiver beforehand, acknowledging the possibility that they might expire during the up to 24-hour-long torment to which they'll be subjected. The 10-mile (16-kilometer) route provides a test of cardiovascular and muscular endurance, agility, ingenuity and physical and mental toughness worthy of a Nepalese Sherpa mountain-climbing guide or a U.S. Navy SEAL commando.

Contestants must endure trials like crawling through mud and barbed wire, running two miles (3.2 kilometers) through moving water and climbing hills while lugging bicycle frames and tree stumps. If that's not bad enough, they're also forced to perform various mental feats, such as memorizing a list of U.S. presidents or reassembling a bunch of Lego pieces in a precise configuration. PEAK, the Vermont-based promoter of the Death Race and other endurance events, playfully taunts possible entrants on its Web site: "Doubtful you'll finish, but you can be proud of yourself for trying" [source: PEAK].

The Death Race is the brainchild of Joe DeSena, a successful Wall Street financial trader turned triathlete and ultramarathoner who got the idea to challenge endurance athletes to a new extreme. Each year since 2007, Death Race organizers have designed a course filled with a new assortment of bizarre physical and intellectual tasks, the exact details of which are kept secret, to make it harder for entrants to prepare. Instead of the cheery encouragement usually offered at races, Death Race organizers seek to mess with contestants' minds, continually urging them to quit and jokingly -- at least one would hope -- offering free on-site burial to anyone who dies trying to finish [source: Brick].

So what must Death Race participants endure? And do any of them make it to finish line?

While The New York Times described the Death Race as "'Survivor' meets 'Jackass,'" the signup form is emphatic: "This is not a joke" [source: Signup]. And if there are contestants who don't take it seriously, they're quickly in for a rude awakening. The competition is so grueling that one recent female contestant described it as "worse than childbirth" [source: O'Gorman].

That said, the Death Race's tasks do have a certain perverse sense of humor to them. In the 2009 event, for example, contestants lined up at the starting line in the 4 a.m. darkness, only to find out that just to get their race bibs, they had to first crawl under barbed wire to a field where they would find it attached to a tree stump -- a tree stump they had to dig out of the ground and bring back with them [source: O'Gorman]. Before the day was over, they also had to climb up a waterfall with a bucket full of rocks, scale a hill while carrying a wheel-less bicycle frame, quarter 20 logs with an ax, and find an egg hidden in the woods and boil it in a tin cup (with the help of a match that they had retrieved from another station on the route) [source: Tim Lewis]. Even the challenges, such as reconstructing the 23-piece Lego sculpture, required physical effort as well. They had to crawl under barbed wire just to see the sculpture, and then dive into a pond and retrieve a bag of Lego pieces from the bottom to complete the task [source: Brick]. In a previous year, contestants had to move a truckload of manure by hand [source: Tim Lewis].

To add to the torment, race organizers stand around sipping coffee and refuse to tell contestants how many events are left. In 2009, just 18 of 49 entrants made it to the finish line. The rest either gave up or failed to complete a task within two hours or the entire course within the 24-hour limit [sources: O'Gorman, Brick]. Various tasks prove to be contestants' Achilles heels. In 2009, one woman competitor couldn't make it past the first event because she had the misfortune to draw a stump whose roots were wrapped around large rocks. A seemingly incredibly fit male gym instructor had his legs give out on him while carrying logs up a hill [source: O'Gorman].

Just being in superb physical condition isn't enough, since the challenges require survival skills, toughness and an agile mind as well. It appears that military survival training is a plus -- the 2009 co-winners were both marines. In a blog that the race Web site posted, one 2009 contestant claimed that he trained by singing the National Anthem while walking blindfolded through a river, and by tying his right arm behind his back for 24 hours straight. Most likely he was joking -- but such a regimen probably wouldn't hurt [source: Doug Lewis].

For people who are interested in the wacky physical and mental challenges of the Death Race, race organizers offer a weekend Death Camp in Pittsfield. Contestants spend the weekend doing things like running up a mountain carrying tires and sledgehammers and pushing rocks around in wheelbarrows.

How Sailboats Work
Could Turkey Trots Get a Whole Nation to Run?
How White-water Rafting Works