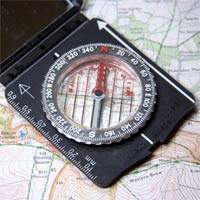 A compass will always point toward the North Pole.
2009 HowStuffWorks

No matter where you stand on Earth, you can hold a compass in your hand and it will point toward the North Pole. What an unbelievably neat and amazing thing! Imagine that you are in the middle of the ocean, and you are looking all around you in every direction and all you can see is water, and it is overcast so you cannot see the sun... How in the world would you know which way to go unless you had a compass to tell you which way is "up"? Long before GPS satellites and other high-tech navigational aids, the compass gave humans an easy and inexpensive way to orient themselves.

But what makes a compass work the way it does? And why is it useful for detecting small magnetic fields, as we saw in How Electromagnets Work? In this article, we will answer all of these questions, and we'll also see how to create a compass from scratch!

A compass is an extremely simple device. A magnetic compass (as opposed to a gyroscopic compass) consists of a small, lightweight magnet balanced on a nearly frictionless pivot point. The magnet is generally called a needle. One end of the needle is often marked "N," for north, or colored in some way to indicate that it points toward north. On the surface, that's all there is to a compass.

To be completely accurate, the bar magnet does not run exactly along the Earth's rotational axis. It is skewed slightly off center. This skew is called the declination, and most good maps indicate what the declination is in different areas (since it changes a little depending on where you are on the planet).

The magnetic field of the Earth is fairly weak on the surface. After all, the planet Earth is almost 8,000 miles in diameter, so the magnetic field has to travel a long way to affect your compass. That is why a compass needs to have a lightweight magnet and a frictionless bearing. Otherwise, there just isn't enough strength in the Earth's magnetic field to turn the needle.

No one knows for sure, but there is a working theory currently making the rounds. As seen on the above, the Earth's core is thought to consist largely of molten iron (red). But at the very core, the pressure is so great that this superhot iron crystallizes into a solid. Convection caused by heat radiating from the core, along with the rotation of the Earth, causes the liquid iron to move in a rotational pattern. It is believed that these rotational forces in the liquid iron layer lead to weak magnetic forces around the axis of spin.

It turns out that because the Earth's magnetic field is so weak, a compass is nothing but a detector for very slight magnetic fields created by anything. That is why we can use a compass to detect the small magnetic field produced by a wire carrying a current (see How Electromagnets Work).

Now let's look at how you can create your own compass.

Creating Your Own Homemade Compass

The first step is to turn the needle into a magnet. The easiest way to do this is with another magnet -- stroke the magnet along the needle 10 or 20 times as shown below.

If you are having trouble finding a magnet around the house, two possible sources include a can opener and an electromagnet that you make yourself (see How Electromagnets Work).

Place your float in the middle of your dish of water as shown below.

The "float on water" technique is an easy way to create a nearly frictionless bearing. Center your magnetic needle on the float. It very slowly will point toward north. You have created a compass!

A magnetic compass like the one created on the previous page has several problems when used on moving platforms like ships and airplanes. It must be level, and it tends to correct itself rather slowly when the platform turns. Because of this tendency, most ships and airplanes use gyroscopic compasses instead.

For more information on compasses, navigation and related topics, check out the links on the next page.

What is the public image of hunters?
Top 4 Bluegill Fishing Tips
What is the best wildlife photography equipment?