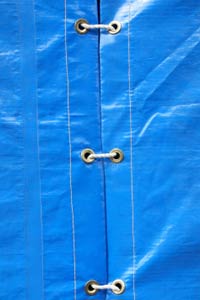 Don't like the idea of showering in the open for all to see? If you're camping with a large group of people, or if you're going to be outdoors at one location for an extended period of time, you might want to consider setting up a shelter around your showering system.

Camping shower shelters are available for purchase online and at most outdoor sports and camping supply stores. They range pretty widely in price, but they all look a bit like a tent. Most have four "walls" made of a fabric coated in polyurethane and fiberglass poles. Some have a ceiling, but they vary in terms of amenities. Handy features might include bars on the outside of the shelter for hanging towels and clothes, mesh pouches on the inside for holding your soap and other toiletries, waterproof pouches for your valuables and optional floors that are placed inside of the shelter to capture shower runoff.

You can also construct your own makeshift shower shelter with a large tarp that's folded in two, with its two open ends tied together with rope. You're also going to need several lengths of rope, some strong scissors or a knife for cutting the rope, and several long poles or sticks.

Here's how you can make your own shower shelter: