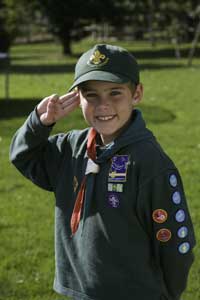 The Boy Scouts of America rely heavily on tradition and awards to inspire each new generation of scouts. One award, the Order of the Arrow, is held by only 180,000 of the 110 million scouts who have gone through the scouting program. The Order of the Arrow is awarded to boys who live the Boy Scout Oath and Law in their everyday life. A boy that has achieved the level of first class rank and has spent at least 15 days and nights camping in the previous two years may be placed into consideration for Order of the Arrow by his troop and with the approval of his Scoutmaster. An exemplary scout who has received the Order of the Arrow and held that honor for two years is put in the running for the Vigil Award. This award is for outstanding service, and only one in every 50 lodge members may receive this award.

Perhaps the highest award in scouting is the designation of Eagle Scout. The process of earning the rank of Eagle Scout is not to be taken lightly. The first step toward earning the rank of Eagle Scout is to become a Life Scout. This ranking is earned by holding leadership positions in the troop, performing community service and earning merit badges. The Life Scout is expected to live the Scout Oath and Law. He must provide personal character references and earn 21 merit badges, including some specifically targeted at the Eagle Scout ranking, such as first aid, camping and personal fitness. He must design and implement a community service project. At the completion of his community service project, he must take part in a Scoutmaster conference and complete an Eagle Scout Board of Review.

Annually, the Boy Scouts of America celebrates its birthday on Feb. 8. Other celebrations include National Scout Day, where Boy Scouts and Girl Scouts work in public parks to recognize National Public Lands Day, and Keep America Beautiful, Inc., has partnered with the Boy Scouts for its Hometown U.S.A. award. This award recognizes the efforts of scouts to improve their communities through developing and maintaining community gardens, building nature trails, adopting areas to keep them litter free and participating in other conservation and improvement efforts.

The boys choose programs that interest them, but the leaders of the troop also drive its involvement. Good volunteers are the backbone of the Scouting program.

Venturing is a Boy Scout program that is open to both boys and girls who are at least 14 years old, but not yet 20. The goal of Venturing is to help young people on their path to adulthood. Each Venturing crew works with a local community organization and focuses on a particular interest -- sports, religion, art. The mission of Venturing is to learn by doing, then share the knowledge you gain with others.