by Melissa Sandoval
NEXT PAGE 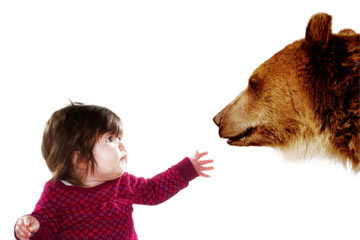 Image Gallery: Mammals There are a number of people-bear encounters in the U.S. each year. See more pictures of mammals.
Richard Newstead/Lifesize/Getty Images

Coming face-to-face with a bear may be the last thing on your mind when you walk out the door, but people often wind up too close to these intimidating animals. In fact, there are an estimated 43,237 encounters between people and black bears each year in North America. In the Greater Yellowstone area alone, researchers recorded 995 conflicts between people and grizzly bears between 1992 and 2000 [sources: Spencer, Gunther]. Bears have approached and even attacked cars and campers and entered campsites or garbage cans looking for food. They're also sometimes attracted to commercial beehives, livestock and other property. On very rare occasions, a bear may even try to prey on a human [source: Herrero].

Even though the majority of person-bear encounters end with no injuries, most people would rather avoid getting too close to these powerful predators in the first place. However, as people visit wildlife areas in larger numbers and build more homes in bear habitats, it becomes increasingly difficult for the two species to avoid each other. Some people use firearms as a defense against bear attacks, but guns hurt more people than bears in these situations and are generally not allowed in most national parks [sources: Alaska Department of Fish and Game, National Park Service]. Wildlife experts and engineers have created another option by inventing gear designed to help keep bears away -- and to help you escape safely if you end up too close to a bear.

There are many types of bear protection gear to choose from, ranging from products such as bear-resistant containers, which as act as a deterrent, to bear sprays, which you can use as a form of self-defense in a bear confrontation. Each item serves a specific purpose, and the key to getting any of them to work for you is in understanding when and how to use it.

Read on to find out how bear-resistant containers can keep your food from becoming bear bait.