10 Ways to Attract Bears to Your Campsite

Camp Near a Carcass 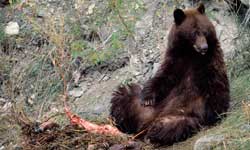 Bears are just lazy enough to relish the opportunity of eating an animal that's already died. The odor of a decomposing carcass definitely will attract any bears in the area. In fact, a black bear in California is reported to have traveled in a straight line more than 3 miles (4.8 kilometers) to reach a dead deer's carcass [source: American Bear Association].

If you spot a dead animal on the trail, report it to the nearest ranger station. And don't even think about approaching the animal, no matter how curious you are. A bear may be lurking just out of your sight, guarding its find. And it won't be pleased that you're moving in on its lunch.

Your lunch, however, is fair game.