10 Ways to Attract Bears to Your Campsite

Do Things That Smell 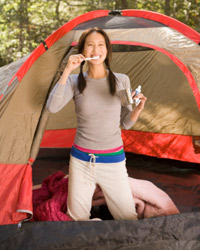 Did you know that even your toothpaste can attract bears?
Jupiterimages/Brand X Pictures/Thinkstock

As we've said previously, a bear's sense of smell is keener than a dog's. While leaving food around in general is a terrible idea, it's also not a bad idea to keep your odorous activities to a minimum.

While cooking over a campfire is bound to emit some smells, others can be avoided. Lotions, deodorants, scented soaps and perfumes are all going to pique the attention of your not-so-friendly neighborhood grizzly or black bear. Pack your toiletries in doubled plastic bags or airtight containers. Be sure to bring extra containers for leftover food or garbage so it's not sitting around (more on that later).

One bear urban legend that persists says they're attracted to the scent of women during menstruation; this hypothesis has never been conclusively proven with black bears or grizzlies [source: Yellowstone]. However, menstrual blood has been shown to elicit a behavioral response in polar bears, so if you're camping in the North Pole and are a post-adolescent female, forewarned is forearmed [source: Cushing].

There is one natural odor that'll definitely draw bears to you. Next up, why you should heed the call of nature with care when camping in bear country.