10 Spectacular Places to Camp in the Winter

by Melanie Radzicki McManus
Prev NEXT
7 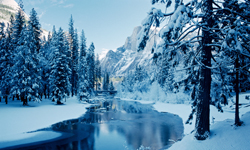 Yosemite is one of the granddaddies of America's National Park System. One of the first wilderness parks in the United States, it's famed for its numerous waterfalls, ancient sequoias and deep meadows. Not surprisingly, it's a popular choice for summer visitors, but crowds vanish come winter, when the mercury drops and the snow begins to fly [source: National Park Service].

Plan to visit December through March, when much of the park is almost certain to be smothered in a blanket of snow. You can still access the Yosemite Valley and Wawona areas by car, so head there. Once you've set up camp, you can look forward to skiing, snowshoeing and hiking. The Glacier Point/Badger Pass Road is plowed to the Badger Pass Ski Area, a popular spot for both downhill and cross-country skiing. You can also cross-country ski along the Wawona Meadow Trail to Mariposa Grove, filled with towering sequoias. And make sure to head over to Yosemite Falls. While the water won't be rushing as fast as it does during springtime, there should still be a small flow [source: Erb, National Park Service].