10 Spectacular Places to Camp in the Summer

by Allison Wachtel
Prev NEXT
9 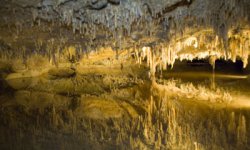 If you've ever wanted to step into an Indiana Jones movie but weren't so crazy about the guns and bad guys, Luray Caverns might be your dream come true. Located in Virginia's Shenandoah Valley near Jefferson National Forest, the Luray Caverns are literally dripping with stone: Stalactites, the pointy spears of rock that sometimes dot cave ceilings, cover the Luray Caverns in elegant and downright breathtaking formations.

Although the Luray Caverns boast one of the most impressive collections in the U.S., stalactites themselves aren't terribly rare. They begin to form when water seeps into a limestone cave, creating a calcium carbonate solution. Caves have a different atmospheric composition than the open areas outside, and when the solution hits the air inside, a tiny deposit of crystallized calcite forms on the ceiling. (When the drops fall and deposits build up from the floor, they're called stalagmites.) Add millions of years into the mix, and you've got formations like Titania's Veil, a cascading, snowy-white pure calcite formation. You'll also hear these formations referred to as dripstone; today, they're dripping into formation at about one cubic inch per 120 years [source: Luray Caverns].

There's no camping allowed inside the caverns, but you'll find plenty of campsites in nearby Shenandoah National Park. Many are located conveniently close to hiking trails and facilities, and the Big Meadows and Mathews Arm campgrounds are nearest to the caverns. The Luray area itself is dotted with high-end campsites, making it a great spot for newbie campers who aren't quite ready to give up modern plumbing.